A new posting by journalist Chris Forrester at the Advanced Television infosite relates that it has been a worrying month or two — the industry saw strong reports that Intelsat was considering a Chapter 11 bankruptcy, that the C-Band Alliance’s members would simply walk away from handing over their long-held U.S. spectrum and that, in the event of a negative response from the FCC, there would follow years of litigation. Not the least of which, there’s been the never-ending battle of filings to the FCC arguing the merits – and otherwise – of a private vs. public auction.

That dark scenario was lifted a little on Thursday, February 6, when FCC Chairman Ajit Pai delivered positive news for the Alliance. While Pai’s decision wasn’t quite what the more optimistic number crunchers had hoped for (anything from $20-$77 billion), but $9.7 billion as an incentive payment, plus up to $5 billion for restructuring and relocation including the cost of new satellites, could be much, much worse.

The $9.7 billion incentive offer does come with caveats: first, the CBA (and Eutelsat) must clear the first 100 MHz of C-band spectrum by September 2021 (Phase 1) and wrap the complete 280 MHz clearances by September 2023 (Phase 2). There is an absolute deadline of September 30th 2025 (see below).

The FCC’s full 185-page/360+ paragraph draft ruling unveiled quite a few challenges for the CBA (and Eutelsat), not least the penalties for failing to meet the FCC’s timetable.

“Space station operators that fail to clear their existing services from the lower 300 megahertz by the final Relocation Deadline will not receive reimbursement for their reasonable relocation costs or any additional Accelerated Relocation Payments, and will also be subject to penalties,” adds the FCC.

Investment bank Berenberg, in a note to clients on February 10, said that after months of speculation, it could now say, with reasonable certainty, what C-band reallocation is worth to the satellite operators.

The bank’s main focus was SES and they stated, “SES will receive just under $4 billion gross. The FCC has also established the allocation of payments. It proposes that SES should receive $983 million for clearing the first 120MHz of spectrum (Phase I) and $3 billion for the remainder (Phase II). Phase I must be completed by 30 September 2021, while Phase II is due by 30 September 2023. However, both payments are dependent on meeting the Phase II deadline, so SES will have to provide a letter of credit that covers the Phase I payment, such that if it does not meet Phase II, it will have to repay the money received in relation to Phase I.”

The payments are worth €5 a share to SES, said the bank. “We have assumed, per SES management prior guidance, that the company will pay tax on the accelerated relocation payments, at a rate of 25 percent. After also adjusting for the fact that the money will be received at the end of 2021 and then the end of 2023, we estimate that these payments should be worth around €5 per SES share. This is significant, both relative to the current share price but also considered versus the fair value of SES without these payments: we estimate this as just over €11/share.” 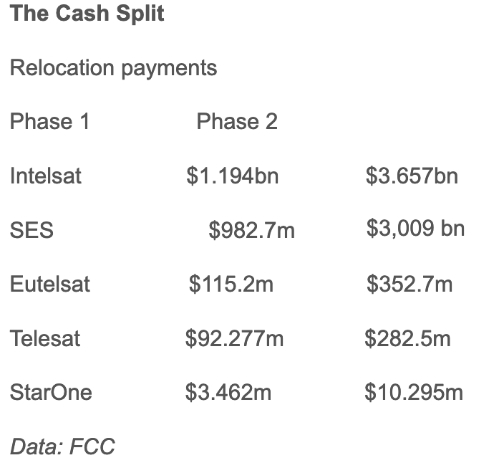 However, there are risks, said the bank. “While it may be tempting to think we should just add the €5 to our core value, there are risks. There may be opposition to the amount of accelerated relocation payments (Senator Kennedy has been vocal in this regard) and the FCC’s proposal may not pass. Equally, SES may not succeed in meeting the Phase II deadline, in which case it will not receive any money at all. We take a 25 percent haircut to our €5 to set a new price target of €14.9. While this implies 20 percent upside, we believe that SES will have to lower guidance for 2020, and see the balance sheet as strained, given the significant spike in capex in 2021. We question whether rating agencies (or indeed shareholders) will give the company the benefit of the C-band payments until the Phase II deadline has been met.”

The prospects for a Chapter 11 bankruptcy restructuring by Intelsat have not totally vanished. It is still one possibility for the giant operator to put its hugely-indebted house in order. A note to clients by investment bank JPMorgan Chase on February 7 said there is “no reason for bankruptcy in the near-term” given the magnitude of the payments. JPMorgan analyst Philip Cusick said the FCC’s Chairman Pai’s proposal to free up spectrum quickly for 5G networks leaves “little hope” for equity investors.

Cusick downgraded Intelsat to a rare underweight rating after being at neutral the past three months, and at overweight for seven months before that — he removed his price target of $9, writing in a note to clients that “we see little to no fundamental equity value in shares,” given Pai’s proposal.