[SatNews] It is also where the market for connectivity has already taken off with over 680 planes already connected.

As airframe manufacturers keep raising their 20-year global aircraft demand forecast, sifting through the expectations of which region and what type of aircraft will be the sweet spot of connectivity is becoming a tricky endeavor.

But looking at manufacturer forecasts, single aisle passenger jets such as the NG737 and the A320NEO (New Engine Option) are the fastest growing segment over the next two decades with Boeing pegging these at 25,700 new units in the 160-seat range.  Asia is gaining the most interest for both Boeing and Airbus as many carriers are buying them by the dozen. The recent purchase of 50 B737s by China’s 9 Air, Spring Airlines’ expected order of 30 A320NEOs, or Indonesia’s Lion Air’s massive order of 234 Airbus A320s and A319s show the pace of growth in the region.  One simply hopes that overcapacity from these carriers or higher oil prices in the short-term will not mean cancellations. 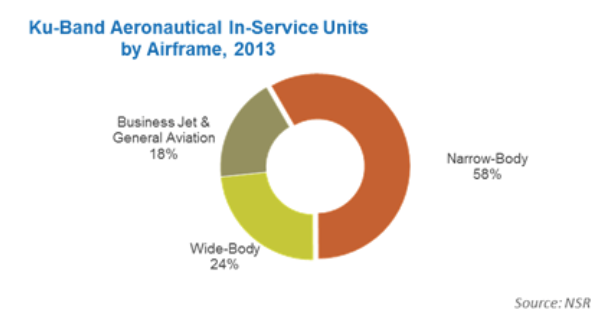 Fortunately, Boeing and Airbus orders for narrow-body units come mostly from North America and Europe where the busiest short- and medium-haul traffic occurs. It is also where the market for connectivity has already taken off with over 680 planes already connected.  These planes are mostly for travel routes below 3 hours, but as airlines extend their range to leverage their international presence in the face of stiff competition from low-cost carriers, they are becoming part of a complete offering whereby connectivity on all routes and airframes is a major differentiator.  Some airlines such as United Continental and Delta Airlines have contracts in place to outfit both long-range and regional aircraft with satellite-based connectivity to do just that. 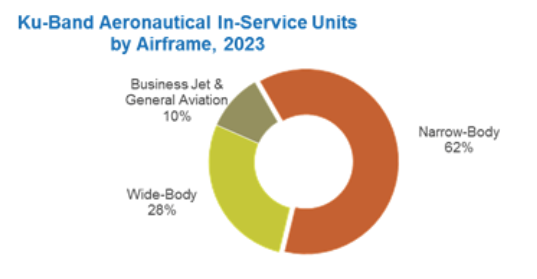 Already Row44 (Global Eagle) leads Ku-band satellite-based connectivity in terms of in-service units thanks to its installs on B737s owned by Southwest Airlines and Norwegian, which also ordered 100 A320s recently.  Row44, GoGo and Panasonic also won orders from UTair, Icelandair, AeroMexico, United Continental and WestJet to outfit what NSR estimates is a backlog of more than 700 narrow-body Ku-band connectivity units in the next 12 to 24 months. As a result, NSR expects retail revenues from Ku-band units to overtake satcom equipment revenues sometime in 2016 as ARPUs grow with the larger installed base.

Bottom Line
Demand for connectivity does not stop at checking emails or surfing the web, but it is also for delivery of TV, movies and other content streamed to personal electronic devices or backseat screens.  And to serve content that is increasingly bandwidth-hungry, Ku-band units are doing the job (for now). Eventually, the advent of HTS capacity over North America, the Atlantic Ocean and Europe will displace some VSAT units on narrow-body aircraft away from Ku-band as more deals are executed by the likes of ViaSat and Panasonic.

But as revenues from customers of satcom show, and with more than 700 planes expected to be outfitted by the end of 2016, the sweet spot for Ku-band satellite-based in-flight connectivity today is narrow-body aircraft in North America and Europe, and eventually across the rest of the world.

You can learn more here.