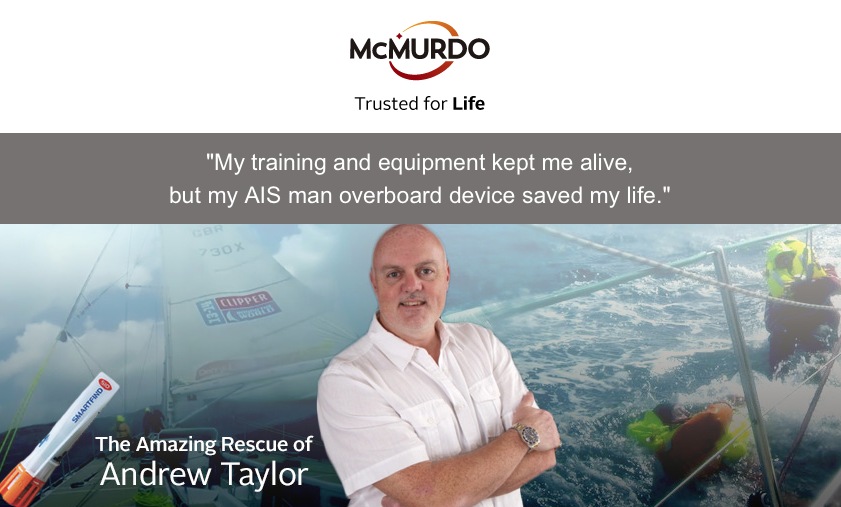 One year ago, those exact coordinates were transmitted from Andrew Taylor’s McMurdo automatic identification system man-overboard (AIS MOB) device to crew members aboard the Clipper Round the World Race yacht Derry~Londonderry~Doire. The story behind the Clipper 2013-14 Race and his dramatic rescue from the rough seas of the North Pacific are the subject of a new book by Taylor entitled 179W — One Seven Nine West, being released today at a book launch event in London.

Taylor will be participating live in McMurdo’s 2015 Search and Rescue Webinar series “AIS Man Overboard — The Andrew Taylor Story” on April 21, 2015, 7am Pacific US/10am Eastern US/3pm London UK. To sign up for the webinar, to watch the rescue video or to purchase Taylor’s book or the AIS MOB device used in his ordeal, please visit http://info.mcmurdogroup.com/AIS-MOB-Andrew-Taylor-Book.html.

Register for the webinar by Friday, April 17th and automatically be entered to win your own AIS MOB device!

The winner will be announced LIVE at the end of the webinar. Register here to win.

“My Clipper Race training and equipment undoubtedly kept me alive and allowed me to stay alive until the boat returned, but McMurdo’s AIS MOB device saved my life,” explains Taylor, an amateur sailor who served as one of the crew members aboard the Derry~Londonderry~Doire during the 2013-14 Clipper Race, a prominent round-the-world yacht race which is uniquely available to ordinary, everyday people.

In the midst of a rough storm in the icy North Pacific Ocean, the Derry~Londonderry~Doire yacht was hit by a huge wave, and Taylor was swept overboard. The yacht was 2,000 miles away from the nearest land, an hour from the nearest racing yacht and no other ocean vessels were within 1,000 miles. The rescue operation was slowed by the bad weather and rough seas, making it nearly impossible to visually locate Taylor. As soon as Taylor activated his McMurdo AIS MOB device, his crew was able to pinpoint his exact location and come to his aid.

“We are delighted to be celebrating Andrew’s amazing story here today,” said Jean-Yves Courtois, CEO of Orolia, McMurdo’s parent corporation. “At McMurdo we strive to make it possible for people to do what they love, whether it’s sailing, flying or exploring, and to keep them safe while they pursue their dreams. Andrew’s story exemplifies this—his Clipper Race crew and our technology kept him safe to race another day.”

AIS is an automatic tracking system originally developed for ships to avoid collisions at sea. AIS is one of the most important innovations in navigation since the introduction of GPS and at least 170 countries now mandate its use on vessels. Ships rely on AIS to monitor other nearby ships; the transmission data is publicly broadcast on VHF radio. McMurdo’s AIS MOB device sends a distress communication to nearby vessels, including the vessel from which the person fell, and all vessels within a four-mile radius. This provides for an immediate response in a man overboard situation where saving time can lead to saving lives.

“Safety of our crew is our top priority as they participate in one of the biggest challenges of the natural world and an endurance test like no other—the circumnavigation of the globe,” says Sir Robin Knox Johnston, founder of the Clipper Race. “I trust McMurdo, and I look forward to jointly developing a new AIS MOB prototype. Between the Clipper Race, McMurdo and Spinnaker Ltd, we aim to work together to utilize the valuable lessons of Andrew’s rescue and to further improve the automatic deployment of McMurdo’s range of AIS MOBs. Our goal is to ensure that this life saving technology remains at the forefront of marine safety equipment.”

All proceeds from the book and a percentage of each AIS MOB device sold will be donated to charity, split equally between The Ellen MacArthur Cancer Trust and The Newmarket Day Centre.

McMurdo Group McMurdo Group is a division of Orolia (NYSE Alternext Paris – FR0010501015 – ALORO) specialists in search and rescue and maritime domain awareness solutions. McMurdo Group brings together over 150 combined years of experience by consolidating proven Boatracs, Kannad, McMurdo and Techno-Sciences, Inc. brands into the industry’s most comprehensive portfolio of life-saving and tracking technologies that save time, costs and lives.

Airbus, Boeing, the British Royal Navy, the U.S. Coast Guard, NASA and others are among the hundreds of aviation, maritime, government and military customers around the world using McMurdo Group distress beacons, satellite connectivity infrastructure, monitoring/positioning software and emergency response management solutions. Established in January 2014, McMurdo Group is based in Sophia Antipolis, France and has additional offices in France (Guidel), the U.S. (San Diego, Washington D.C.) and the U.K. (Portsmouth).

The Clipper Round the World Yacht Race is the world’s longest ocean adventure and is also regarded as one of the toughest endurance challenges. At 40,000 nautical miles long and taking almost a year to complete, it consists of twelve teams competing against each other on the world’s largest matched fleet of 70-foot ocean racing yachts. The Clipper Race was established in 1996 by Sir Robin Knox-Johnston, the first person to sail solo non-stop around the world in 1968-69. His aim was to allow anyone, regardless of previous sailing experience, the chance to embrace the thrill of ocean racing; it is the only event of its kind for amateur sailors. Around 40 per cent of crew are novices and have never sailed before starting a comprehensive training program ahead of their adventure. The tenth edition of the race starts in August 2015 and will include over 600 crew from more than 40 different countries.