Airbus Defence + Space Has The Evidence To Build A Big Case ...Ariane 6 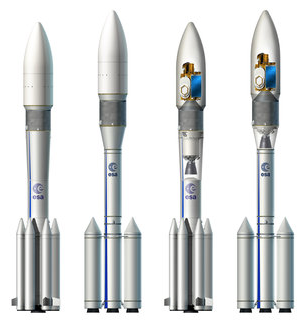 Some of the Ariane 6 concepts under investigation

[SatNews] ...boosters, will be the largest carbon motor case ever produced in Europe....

Airbus Defence and Space has just begun the first filament winding operations on a motor case for the future European launcher Ariane 6. This first unit, of a size representative of the future Ariane 6 boosters, will be the largest carbon motor case ever produced in Europe. It demonstrates that Airbus Defence and Space can master this technology, which is essential for the Ariane 6 program. This operation follows on from the production of the first elements of the upper stage common to Ariane 5 ME and Ariane 6.

The motor case is a vital part of a solid-propellant launcher’s motor because it plays a dual role, serving as both the tank for the propellant (the launcher’s fuel) and, more importantly, the structure of the launcher, for which it constitutes to a certain extent the fuselage. This first major stage in the production of the future European launcher was carried out with funding from the French space agency CNES, as part of the French Investment for the Future Programme (Plan d’Investissements d’Avenir – PIA) and France’s contribution to ESA’s Ariane 6 program.