NASA's Confidence in Orbital’s Pegasus Rocket... the Launch of an ICON...


[SatNews] It is the world’s only small space launch vehicle that has been certified with NASA’s Risk Category 3, which the space agency reserves for its highest value space missions.

Orbital Sciences Corporation (NYSE: ORB) announced that the National Aeronautics and Space Administration (NASA) has awarded the company a contract for its Pegasus® rocket to launch the space agency’s Ionospheric Connection Explorer (ICON) scientific satellite into low Earth orbit. With the selection of Orbital’s air-launched Pegasus rocket, NASA is again turning to Orbital to provide both the satellite and launch vehicle for an important science mission based on advanced and cost-effective smaller space systems.

In 2013, NASA selected Orbital to design, build and test the ICON satellite. The spacecraft is now starting production at Orbital’s Dulles, Virginia, satellite design, manufacturing and testing facilities. The launch of ICON aboard Pegasus will take place in mid-2017 from the Reagan Test Site at Kwajalein Island near the equator in the mid-Pacific Ocean area. Pegasus is a launch system for the deployment of small satellites into low-Earth orbit. Its patented air-launch system, in which the rocket is launched from beneath Orbital’s “Stargazer” L-1011 carrier aircraft over the ocean, reduces cost and provides customers with flexibility to operate from virtually anywhere on Earth with minimal ground support requirements. It is the world’s only small space launch vehicle that has been certified with NASA’s Risk Category 3, which the space agency reserves for its highest value space missions. 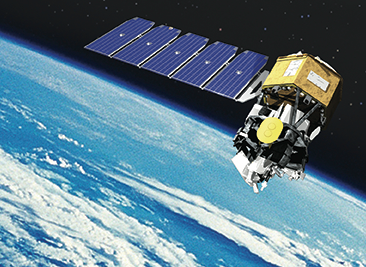 Artist's rendering of ICON in orbit

“We are very pleased that NASA continues to recognize the value of the Pegasus space launch vehicle to support smaller-size and cost-effective science missions,” said Mr. Ron Grabe, Orbital’s Executive Vice President and General Manager of its Launch Systems Group. “Our Pegasus team is now working on two upcoming missions, including ICON and the CYGNSS launch that is scheduled for late 2016.” The two upcoming Pegasus missions, CYGNSS and ICON, will be the 43rd and 44th Pegasus launches since the vehicle’s first flight in 1990.

Orbital has provided both the satellite and launch vehicle for numerous previous NASA scientific missions, which have provided scientists around the world with critical data in the fields of Earth science, heliosphysics and astrophysics. The most recent example of this dual capability occurred in mid-2012, when Orbital launched the company-built Nuclear Spectroscopic Telescope Array (NuSTAR) satellite aboard a Pegasus rocket. Other past examples of the pairing of an Orbital satellite and rocket for NASA science missions include the IBEX, AIM, SORCE, GALEX and RHESSI projects, all of which were launched aboard Pegasus rockets in the 2002-2008 period.The ICON mission was chosen by NASA for its high scientific value and low-risk development plan. It will improve the forecasts of extreme space weather by probing the variability of Earth’s ionosphere with in-situ and remote-sensing instruments. Fluctuations in the ionosphere can disrupt satellite and radio communications from low- and geostationary-orbit communications spacecraft, creating a direct impact on the nation’s economy. The scientific findings resulting from the ICON mission could, for example, benefit commercial aircraft, as GPS signals can be distorted by charged-particle storms in the ionosphere.

The ICON program is being led by Principal Investigator Dr. Thomas Immel of the University of California/Berkeley’s Space Sciences Laboratory (UCB/SSL) and mission management is performed by UCB/SSL under NASA’s Goddard Space Flight Center Explorers program.

More information about Orbital can be found here.