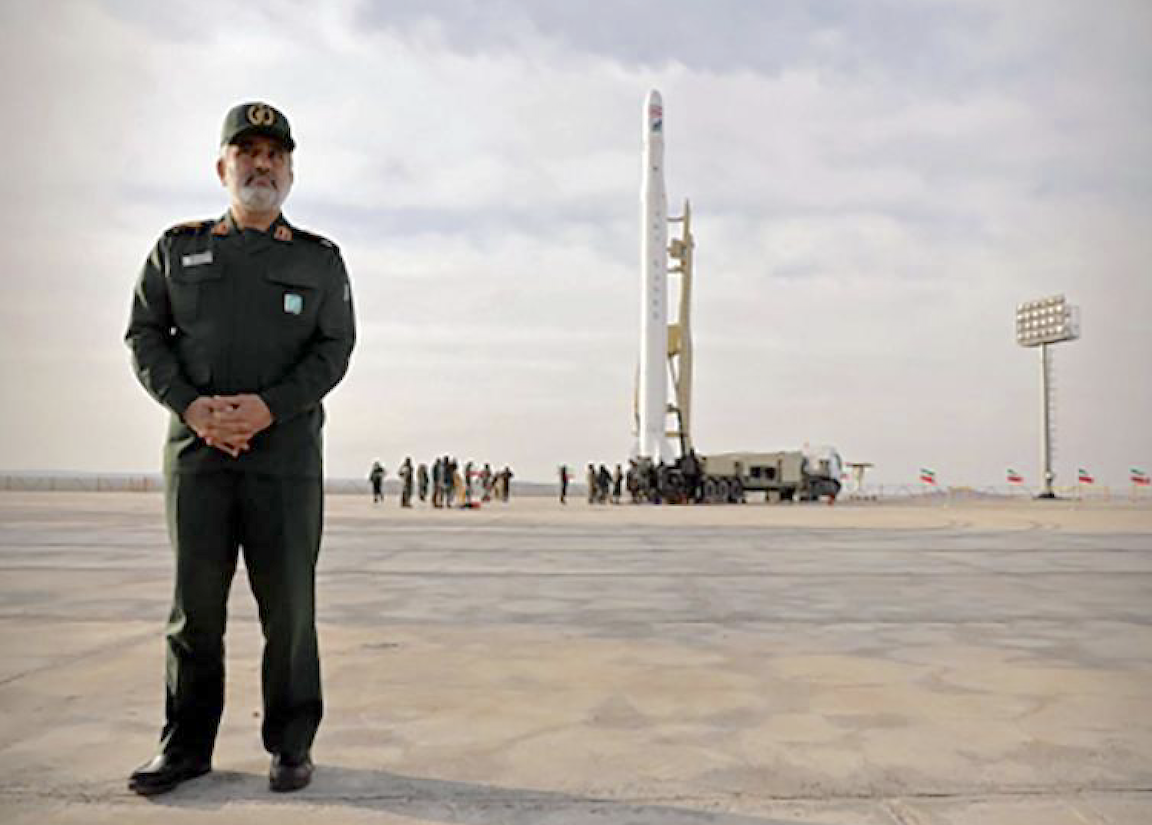 Grappling with the coronavirus pandemic, historically low oil prices and economic sanctions imposed by the United States, Iran’s Islamic Revolutionary Guard Corps (IRGC) launched the satellite Noor (Light) into orbit on April 22. The launch, which took place on the 41st anniversary of the formal establishment of the IRGC, communicates a message of resilience to Washington, but is also a slight to the hapless President Hassan Rohani, who may not have been previously aware of the launch and whose civilian satellite program is marred by failure.

In his first comments on the orbital launch, IRGC chief commander Major-General Hossein Salami congratulated Iranian Supreme Leader Ayatollah Ali Khamenei, and said “the successful launch further elevates new aspects of Iran’s defence capabilities.” According to Salami, “powerful militaries of the world today can’t have a comprehensive defence strategy without having a presence in space. Access to this advanced technology, which expands our capabilities, is a strategic achievement.” Explaining the launch in similar terms, Brigadier-General Amir-Ali Hajizadeh, head of the IRGC’s Aerospace Force, emphasised that access to outer space is “not a choice, but a necessity.”

However, what the Islamic Republic depicts as a necessary defensive capability is perceived as an offensive capability by the United States. US officials fear long-range ballistic technology used to put satellites into orbit could also be used to launch nuclear warheads. The Pentagon declined to confirm whether the satellite was in orbit and operational, saying it would take time to make such an assessment. US Secretary of State Mike Pompeo, however, said the missile launch violates the United Nations Security Council Resolution 2231, which states that Iran is “called upon” to refrain, for up to eight years after the Iran nuclear deal, from work on ballistic missiles designed to deliver nuclear weapons.

Tehran has, until now, argued “called upon” is not similar to an outright prohibition, and questions Pompeo’s moral right to criticise Iran for not abiding by a nuclear deal and a resolution from which the United States withdrew in May 2018. However, other parties committed to the Iran nuclear deal, in particular the European Union, are now facing a dramatic increase of the range of Iran’s missiles, which prior to the launch were limited to 2000 kilometres.

Closer to home, the entire affair comes as an embarrassment to Rohani, who delivered a televised speech prior to the launch but did not make a single reference to it. Was Rohani aware of the impending launch, but not authorized to comment on it in case it failed, or had the IRGC not even bothered to inform the president? Under any circumstance, Rohani and his technocratic government will lose face, particularly since the launch of the civilian communications satellite Zafar 1 failed in February 2020.

While the Revolutionary Guard leadership may be celebrating its victory, the Iranian public’s reaction is not clear. Will Iranians take pride in the IRGC’s success, or will they see it as another example of government waste in the midst of a pandemic and economic hardship? As successful as the IRGC’s air and space program may be, and as necessary as it may be for a country with an antiquated Air Force and a poorly financed conventional military, the Revolutionary Guard is failing to convince the average Iranian of the necessity of financing its space program. Those commanders would do well to study the fate of the Soviet Union, which collapsed in spite of its space program, intercontinental ballistic missiles and nuclear arsenal.

Ali Alfoneh is a Visiting Scholar at the Arab Gulf States Institute in Washington.