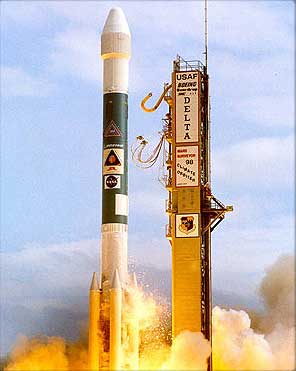 Delta II rockets can be configured into two-or three-stage vehicles to accommodate a variety of mission requirements.
[SatNews] Notification from ULA Media indicates positive information regarding the Delta II Cosmo SkyMed-4. The launch is still a go for tonight, November 5, at 7:20:03 p.m. PDT from Vandenberg, Air Force Base, California. The weather is now forecast to be 80 percent acceptable for launch.

Launch Broadcast:  Starts at 6:45 p.m. PDT and here are the satellite coordinates


The launch of the Delta II COSMO-SkyMed 4 (Constellation of four SAR radar satellites for global Earth Observation performed for the Italian Space Agency, the Minister of Defence and the Ministry of Research) mission has been rescheduled for Friday, November 5 as the result of during a review and analysis by Thales Alenia Space of the current position of the three COSMO-SkyMed satellites currently on orbit, it was determined that in order for COSMO SkyMed-4 to be correctly inserted into the constellation, a launch could not take place on November 4 due technical reasons.

Thales Alenia Space Italia developed the COSMO-SkyMed program for the Italian Space Agency and the Italian Ministry of Defence. It is an end-to-end Earth observation dual-use (civil and military) system comprised of four medium-sized satellites and supporting ground stations for orbit control systems and data reception and processing. The system will take imagery of the Earth using an X-Band Synthetic Aperture Radar instrument capable of operating in all visibility conditions at the request of institutional and commercial users, including members of the civil and scientific, and defense communities.

Launch Webcast:  A simulcast of the broadcast will be available on the web at: here.