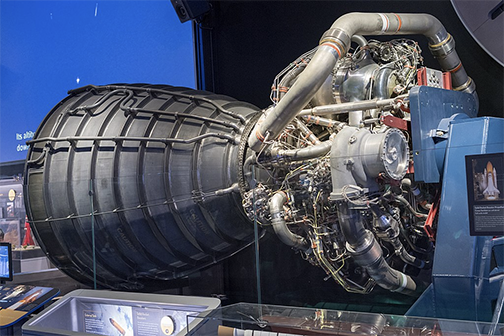 The RS-25 engine, an advanced version of the Space Shuttle Main Engine, has a strong legacy of safely and reliably powering human spaceflight. All four of the RS-25 engines that will fly on the first SLS flight also flew during the Space Shuttle Program; they have since been updated with new controllers and adapted for the unique operating environment of SLS.

The engines will be operated at a higher power level than was used during the shuttle flights, providing SLS with additional thrust. An infographic about the first four engines and their flight history can be found here.

In addition to the RS-25 engines, Aerojet Rocketdyne is also providing the RL10 engine that will power the SLS upper stage, known as the Interim Cryogenic Propulsion Stage (ICPS), as well as the composite overwrapped pressure vessels and reaction control system thrusters. The ICPS is complete and ready for integration with the rest of the SLS rocket components at Kennedy Space Center. 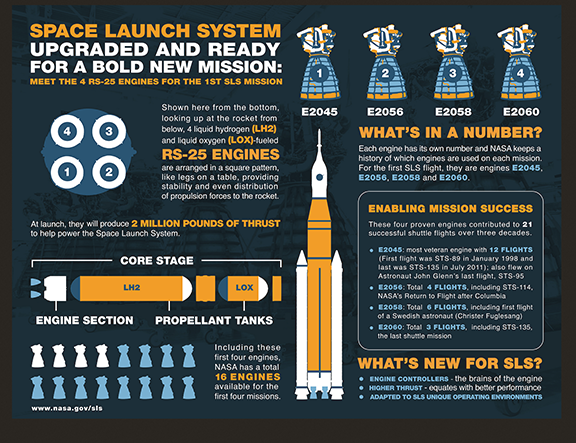 Earlier this year, Aerojet Rocketdyne delivered the jettison motor, which is part of the Launch Abort System that will ensure crew safety in the event of a launch or pad anomaly. Additionally, Aerojet Rocketdyne has assisted in refurbishing the main engine for the service module, and delivered the reaction control system engines for the Orion crew module and eight auxiliary engines for Orion’s European Service Module, which will ride atop the SLS.

Eileen Drake, Aerojet Rocketdyne CEO and President, said the Space Launch System is a foundational element of our nation’s deep space exploration architecture that will allow humans to return to the Moon and eventually set foot on Mars. Built on the proven propulsion system that powered space shuttles to orbit for more than three decades, SLS will enable more complex exploration missions and will send astronauts and large cargo farther and faster than any rocket in history. Aerojet Rocketdyne engines have powered every astronaut launched from U.S. soil and, with SLS, we will build on this strong legacy. There is no other rocket built or in production with the lift capability of SLS.