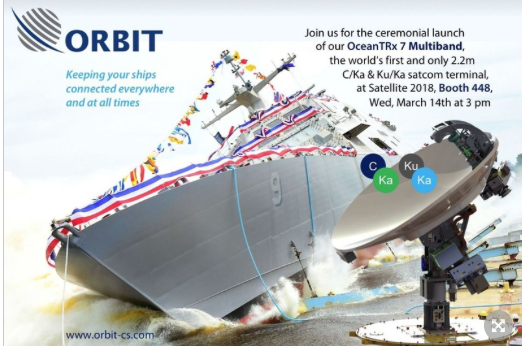 Eitan Livneh, Orbit’s President and CEO said the ability to seamlessly transfer between new-space satellites and legacy satellites means that connections are never lost, and that ships equipped with their multiband terminal will certainly have a competitive edge in their ability to continuously communicate.

OceanTRx 7 Multiband is a new compact maritime satcom solution that offers industry-standard RF performance equivalent to a 2.4m (95”) dish with a 2.7m (106”) footprint. The key to this breakthrough is an very small footprint with outstanding RF performance relative to its size, strict regulatory compliance and support for multiple optional RF chains.

Additionally, the multiband terminal takes up to 40 percent less deck space than industry-standard 2.4m (95”) and 3.8m (150”) systems and is more than 30 percent lighter than competitive solutions. Additionally the terminal is small enough to be shipped as a fully-assembled and tested unit in a standard 20-foot container, the OceanTRx 7 Multiband can be installed in half a day. Key advantages include: