[SatNews] Following extensive testing in India, the Hylas-1 telecommunication satellite has been given the go-ahead for shipping to Europe’s Spaceport in French Guiana for its November flight. 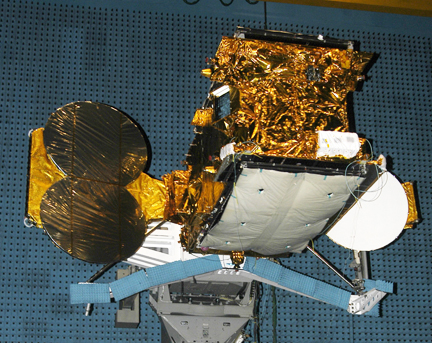 Hylas-1 during qualification testing at the Compact Antenna Test Facility (CATF) at ISRO's Bangalore satellite centre Credits: ISRO
The Hylas-1 mission, a public-private partnership between ESA and Avanti Communications in the UK, will target the high demand for broadband services in Europe. The Agency’s advanced communications payload will deliver broadband services to hundreds of thousands of European customers on a flexible basis, shifting bandwidth between regions in line with demand. EADS Astrium is the mission prime contractor, with the satellite platform coming from Antrix Corporation, the commercial arm of the Indian Space Research Organization (ISRO). Satellite assembly and qualification testing were performed in Bangalore, India. Other European and Canadian companies including TESAT, COM DEV, and Casa Espacio provided essential equipment for the communication payload. 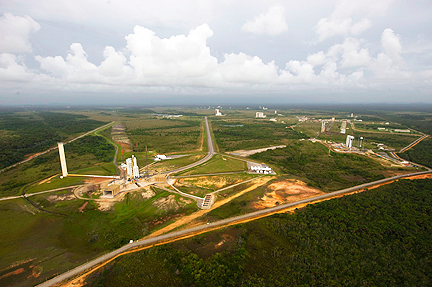 Aerial view of various launch complexes at Europe's Spaceport in Kourou, French Guiana. Credits: ESA - S. Corvaja
The satellite’s readiness to begin its scheduled launch campaign was assessed in Bangalore on September 18th. Senior officials from Avanti, ESA, Astrium and ISRO/Antrix studied the results of Hylas-1’s tests before giving the green light. A Russian Antonov-124 aircraft will carry Hylas from Bangalore to Kourou in early October, along with all the support equipment. Launch is planned for November on an Ariane 5 ECA, shared with another telecommunication satellite. Hylas will be followed in the next two to three years by two further satellites developed in partnership programs with SATCOM operators: Alphasat, developed with Inmarsat with Astrium as prime contractor, and HAG-1, developed with Hispasat with OHB as prime contractor.