Inmarsat Saves The Day As Container Ship Does The Splits

[SatNews] "The quick rescue would have not been possible without the use of ‘this service’," 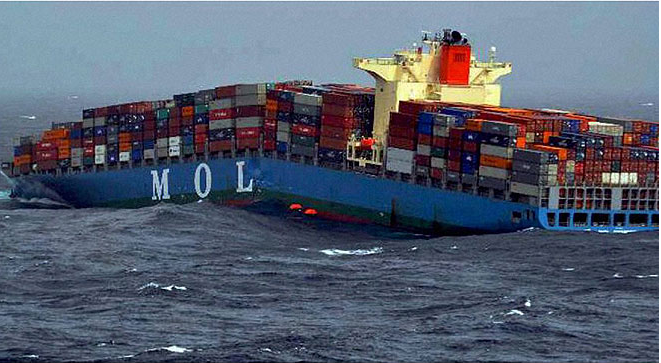 A massive container vessel which snapped into two and sank off Yemen on Monday. Indian Coast Guard (ICG) Mumbai, coordinated operations to help rescue 26 sailors from the vessel. The tragedy occurred around 200 nautical miles from Yemen, and around 840 nautical miles west of Mumbai. PTI Photo

The Singapore-bound merchant vessel from Jeddah split into two around 840 nautical miles off the coast causing oil spill even as all the crew members were rescued, Coast Guard officials said. The rescued crew members are being sent to Colombo, they said.

'Mol Comfort', the 316-m-long vessel was carrying 4,500 containers from Saudi Arabia, they said.

"The vessel hull broke into two off the Mumbai coast and the crew members were rescued from the ship in two life rafts and a life boat," a Coast Guard official said.The Coast Guard coordinated the rescue operation and all the 26 members of the crew, 12 Russians and 14 Filipinos, were rescued.

The 26-strong crew alerted the Indian Coast Guard that they were abandoning ship and were able to escape in a lifeboat and two life rafts before the carrier, loaded with about 7,000 containers, split in half.

The MV Yantian Express was first to arrive on scene and picked up the crew. There were no reported injuries. "The quick rescue would have not been possible without the use of Inmarsat," said Mumbai MRCC Commandant NV Rama Rao.

The two sections of the vessel are now drifting 20 nautical miles apart in the Indian Ocean.

The Japanese shipping company has sent a patrol boat to monitor the situation until tugboats can tow the wreckage to port.

Meanwhile the coast guard is using Inmarsat’s EGC SafetyNet service to provide updates for other vessels in the area. MOL reports that there has been no large oil spill and that most of the containers remain on board.

"We have started investigating the cause of the incident jointly with the vessel's shipbuilder, Mitsubishi Heavy Industries," it stated.

The cause behind the incident was yet to be ascertained. It was also not known what the ship was transporting.