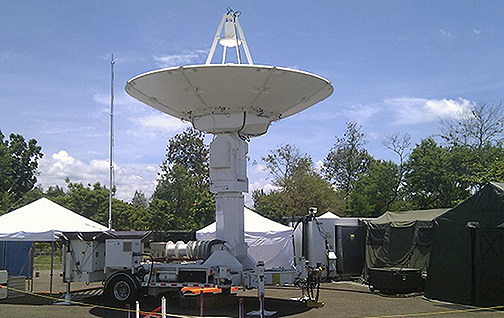 Photo is courtesy of Airbus Defence and Space.

The system receives and processes SPOT 6 and 7, TerraSAR-X and Pléiades images, and is also capable of processing Landsat, Radarsat, RapidEye, Cartosat, Ikonos, Cosmo-SkyMed and Resurs-DK data. The Eagle Vision Program has been a valuable asset within the U.S. Air Force for the past 25 years. The program enables the Warfighters, First Responders and Planners to have situational awareness so that they can plan, execute and deliver mission resources efficiently and effectively.

François Lombard, Director of the Intelligence Business at Airbus Defence and Space, said that the firm is celebrating this uninterrupted success since 1993 — Eagle Vision has become a valuable source for commercial imagery exploitation for the U.S. Air Force and many entities within the US Government, to provide fresh, near real-time satellite data for information extraction in preparation for mission critical applications.