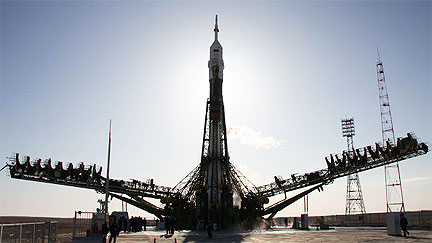 Soyuz TMA — © RIA Novosti. Oleg Urusov
[SatNews] Additional living space for tourists could be in the cards for the Soyuz TM launch vehicle...

The U.S.-based Space Adventures, currently offering tourist orbital spaceflights, has offered to equip the Russian Soyuz TMA spaceship with additional living space for eight-day commercial flights around the moon, the company said late last week. According to RIA Novosti, the firm announced on April 28th that it would offer moon orbit tourist trips, albeit with a price tag of around $150 million per seat. "After consultation with Rocket Space Corporation Energia (the Soyuz TMA design authority), modifications to the Soyuz TMA configuration have been agreed upon. The most important is the addition of a second habitation module to the Soyuz TMA lunar complex," Space Adventures said.

Space Adventures homepage
A moon tour mission would include separate launches of a Soyuz and the upper stage, their docking in a low Earth orbit, a flight to the moon with the upper stage engine, the separation of Soyuz from the upper stage rocket, an orbit around the moon, return to Earth and landing. Space Adventures is currently selecting candidates for the next space tour together with the Russian Federal Space Agency. The company quoted Vice Chairman Richard Garriott as saying it had sold one of the two seats for the flight and anticipated that the launch would occur in 2015. The CEO of Russia's Gagarin Research & Test Cosmonaut Training Center, Sergei Krikalyov, has said the center was ready to train a professional cosmonaut and a space tourist for the future flight.