Tribute ... How a Bean Became a Moon Walking NASA Astronaut and Accomplished Artist 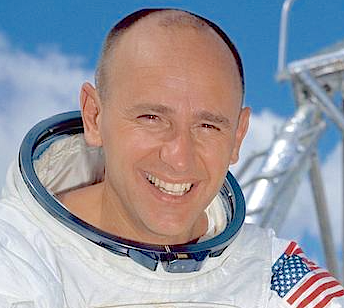 NASA remembers Apollo 12 astronaut Alan Bean, who walked on the Moon in 1969, commanded the second Skylab crew in 1973 and went on in retirement to paint the remarkable worlds and sights he had seen like no other artist. Credits: NASA

He was a boundary pusher in more than one way — he exemplified what some might categorize as a Renaissance man whose expertise and talents were versatile, accomplished and diverse. He walked on the Moon in 1969, headed up the Skylab crew in 1973 and then, perhaps to many folks surprise, opted to retire and paint images of the unique sights that to this date only a few privileged have been fortunate to experience first-hand.

And now he has left Earth permanently ... Godspeed, Astronaut Bean.

Alan Bean walked on the moon on Apollo 12, commanded the second Skylab crew and then resigned after 18 years as an astronaut to paint the remarkable worlds and sights he had seen.

Bean was lunar module pilot on the November 1969 Apollo 12 mission, the second moon landing.  He and mission commander Pete Conrad explored on the lunar Ocean of Storms and set up several experiments powered by a small nuclear generator.

“As all great explorers are, Alan was a boundary pusher," NASA Administrator Jim Bridenstine said in a statement. "Rather than accepting the limits of technology, science, and even imagination, he sought to advance those lines — in all his life’s endeavors. 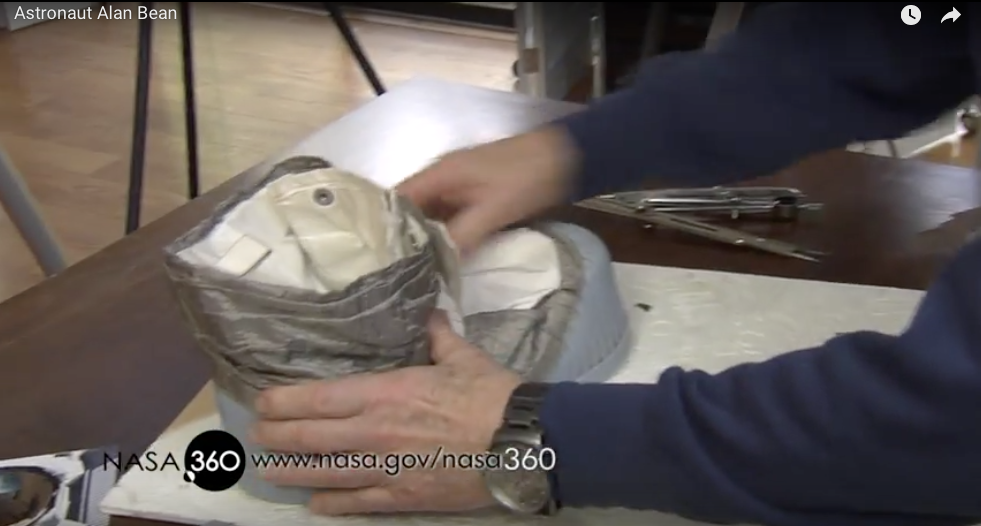 Bean reveals to interviewer how he achieved the texture of his oil painting using a genuine moon boot and modeling paste.

The following is a statement from NASA Administrator Jim Bridenstine on the passing of Apollo and Skylab astronaut Alan Bean:

“Alan Bean once said ‘I have the nicest life in the world.’ It’s a comforting sentiment to recall as we mourn his passing.

“As all great explorers are, Alan was a boundary pusher. Rather than accepting the limits of technology, science, and even imagination, he sought to advance those lines — in all his life’s endeavors. Commissioned in the U.S. Navy in 1955, he chose the challenging pursuit of flight training and, after four years as a Naval pilot, decided to challenge himself further by attended the Navy Test Pilot School and becoming a test pilot.

“He joined NASA’s astronaut corps in 1963 and, just six years later, was piloting the lunar module for the Apollo 12 mission. During that mission, he walked on the Moon. Yet he pushed farther. In 1973, Alan commanded the Skylab Mission II and broke a world record with a 59-day flight traversing 24.4 million miles. In all, he had a hand in breaking 11 world records in the areas of space and astronautics. 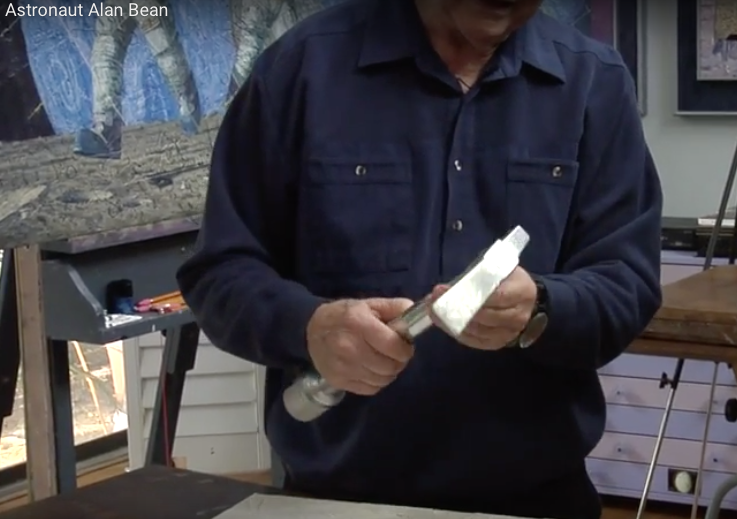 ... and he used the same hammer to create texture on his painting as he used on the Moon to create a hole for the pole of the American flag.

“After logging 1,671 hours and 45 minutes in space, Alan passed the baton to the next generation of astronauts and changed fronts, looking to push the boundaries of his own imagination and ability as an artist. Even in this endeavor, his passion for space exploration dominated, as depicted most powerfully is his work ‘Hello Universe.’ We will remember him fondly as the great explorer who reached out to embrace the universe.”

In an interview for NASA's 50th anniversary in 2008, Bean said walking on the moon was one of the most fun things he had done.

"At one-sixth gravity in that suit, you have to move in a different way," he said. "One of the paintings that I did was called 'Tip Toeing on The Ocean of Storms.' And it shows that I'm up on my tip toes as I'm moving around. And we did that a lot. On Earth, I weighed 150 pounds; my suit and backpack weighed another 150. 300 pounds. Up there, I weighed only 50. So I could prance around on my toes. It was quite easy to do. And if you remember back to some of the television we saw, Buzz and Neil on the Moon with Apollo 11. Black and white. They were bouncing around a lot. They were really bouncing on their tip toes. Quite fun to do. Someday maybe be a great place for a vacation." 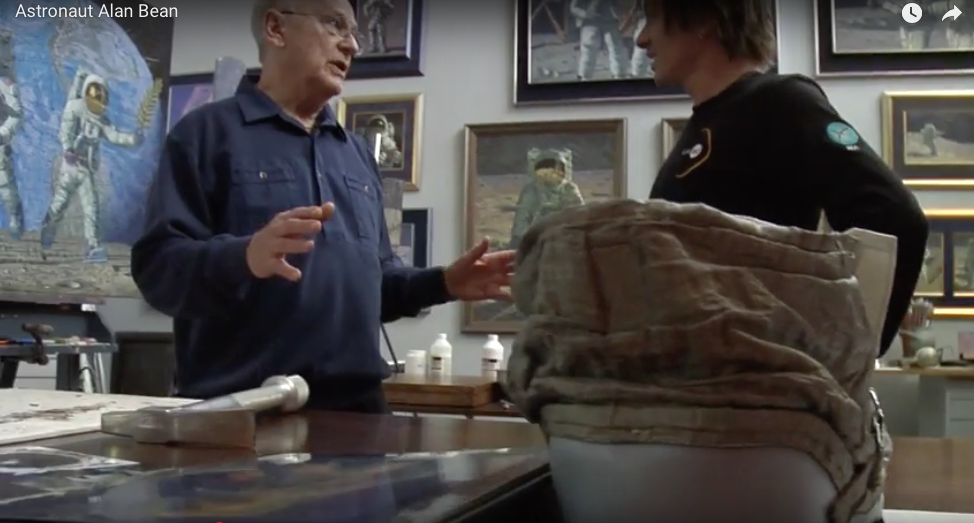 Alan Bean with his interviewer in Bean's 'perfect environment for a studio' surrounded by memorabilia and his art.

As spacecraft commander of the Skylab II mission II, from July 19 to September 25, 1973, Bean and fellow crewmembers Owen K. Garriott and Jack R. Lousma accomplished half again as much as pre-mission goals. Their 59-day, 24.4-million-mile flight was a world record.

Alan L. Bean was born in Wheeler, Texas.  He graduated from Paschal High School in Fort Worth, Texas. In 1955, Bean was awarded an aeronautical engineering degree from the University of Texas.

He was a Navy ROTC student there and was commissioned when he graduated.  After he finished flight training, he spent four years with a jet attack squadron and then attended Navy test pilot school. 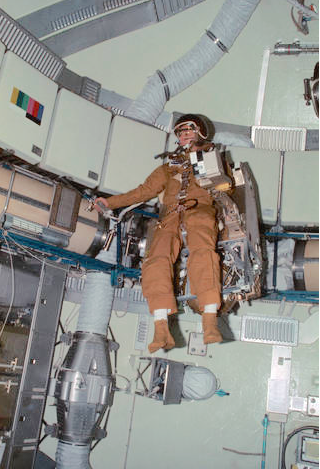 Astronaut Alan Bean, Skylab 3 commander, flies the M509 Astronaut Maneuvering Equipment in the forward dome area of the Orbital Workshop on the space station cluster in Earth orbit. Bean is strapped into the back mounted, hand-controlled Automatically Stabilized Maneuvering Unit (ASMU). The dome area is about 22 feet in diameter and 19 feet from top to bottom. Credits: NASA

Bean flew as a test pilot on several types of aircraft before he was selected with the third group of NASA astronauts in October 1963.  He served as a backup for crewmembers on Gemini 10 and Apollo 9.

After his Apollo and Skylab flights, Bean remained with NASA while many of his astronaut colleagues went elsewhere as the Apollo program wound down.  He served as a backup spacecraft commander for the last Apollo flight, the Apollo-Soyuz Test Project in July 1975.

He retired from the Navy as a captain in October 1975 but continued to work with NASA as a civilian. He headed the Astronaut Office’s Astronaut Candidate Operations and Training Group at Johnson Space Center.

Bean logged 1,672 hours in space, including more than 10 hours of spacewalks on the moon and in Earth orbit. He flew 27 aircraft types and accumulated more than 7,145 hours of flight time, 4,890 hours of it in jets

During his career he established 11 records in space and aeronautics, and received many awards and honors.

His decision to retire from NASA to devote full time to painting was, he said, based on his 18 years as an astronaut, during which he visited places and saw things no artist’s eye had ever seen firsthand.  He said he hoped to capture those experiences through his art.

He followed that dream for many years at his home studio in Houston, with considerable success. His paintings were particularly popular among space enthusiasts.