NASA...FASTSAT Satellite Outside The Box — And The Igloo! (Launch) 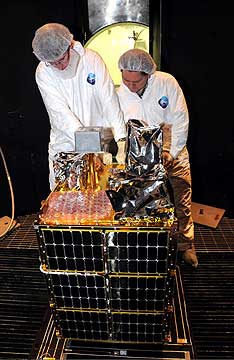 NASA scientists work on the Fast, Affordable, Science and Technology Satellite, or FASTSAT, after successfully completing a comprehensive pre-shipment review. Image credit: NASA/MSFC/D. Stoffer
[SatNews] Win-win for NASA and their first microsatellite. The FASTSAT is designed to create a capability that increases opportunities for secondary, scientific and technology payloads, or rideshares, to be flown at lower cost than before has arrived at Kodiak Island, Alaska, to begin final launch preparations.

The Fast, Affordable, Science and Technology Satellite, or FASTSAT, arrived at the Kodiak Launch Complex on August 10 from NASA's Marshall Space Flight Center in Huntsville, Alabama. Following final checkout, the just under 400-pounds satellite will be integrated on a Minotaur IV launch vehicle as one of three secondary payloads.

"FASTSAT was selected as an 'outside the box' solution that afforded a highly synergistic concept which satisfied experiment, payload and launch schedule requirements," said Mark Boudreaux, FASTSAT project manager at the Marshall Center. "This milestone brings us one step closer to developing a unique, small satellite platform and the environment needed to perform low-cost research in space." 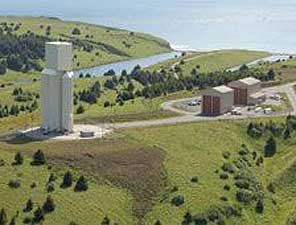 Kodiak Launch Complex in Kodiak, Alaska. Credit: Alaska Aerospace Corporation
Outfitted with six technology and atmospheric experiments, the microsatellite will lift off from the Kodiak complex no earlier than September 24. The satellite will be launched into a 404-mile circular orbit to perform the 180-day mission.

The overall objective of the FASTSAT mission is to demonstrate the capability to build, design and test a microsatellite platform to enable governmental, academic and industry researchers to conduct low-cost scientific and technology experiments on an autonomous satellite in space.

Mission operations for FASTSAT and all six experiments will be managed from the small satellite control room at the Huntsville Operations and Science Control Center at the Marshall Center.

FASTSAT will fly on the STP-S26 mission — a joint activity between NASA and the U.S. Department of Defense Space Test Program. The satellite was designed, developed and tested at the Marshall Center in partnership with the Von Braun Center for Science & Innovation and Dynetics Inc. of Huntsville. Dynetics provided key engineering, manufacturing and ground operations support for the new microsatellite. Thirteen local firms, as well as the University of Alabama in Huntsville, were also part of the project team.