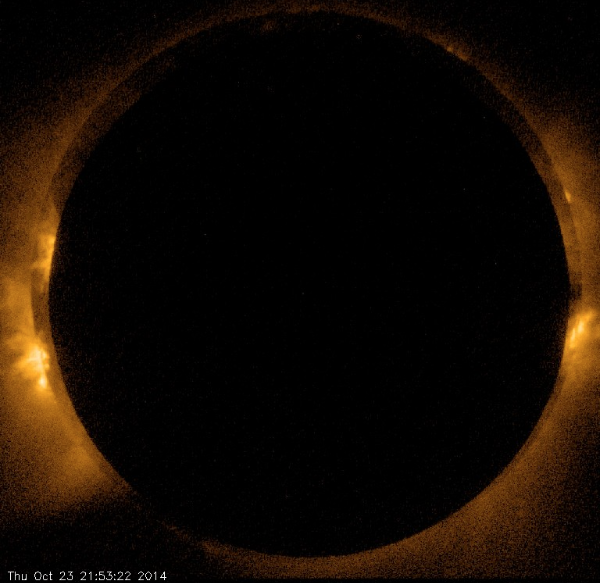 On October 23rd, while North America was witnessing a partial eclipse of the sun, the Hinode spacecraft observed a “ring of fire” or annular eclipse from its location hundreds of miles above the North Pole. This image was taken by the X-ray Telescope. Credit: NASA/Hinode

[SatNews]  The energy source that heats the corona is a puzzle. The sun's surface is only 10,000 degrees Fahrenheit, while the corona is more than 100 times hotter.

A giant active region on the sun erupted on October 26, 2014, with its sixth substantial flare since October 19. NASA's Solar Dynamics Observatory, which watches the sun constantly, captured images of the event. Solar flares are powerful bursts of radiation. They can't physically affect humans on the ground, but—when intense enough—can disturb the atmosphere where GPS and communications signals travel.

The moon passed between Earth and the sun on Thursday, October 23. While avid stargazers in North America looked up to watch the spectacle, the best vantage point was several hundred miles above the North Pole.

The Hinode spacecraft was in the right place at the right time to catch the solar eclipse. What's more, because of its vantage point Hinode witnessed a "ring of fire" or annular eclipse.

An annular eclipse occurs when the moon passes directly in front of the sun but doesn't cover it completely because the moon appears too small. (The apparent size of the moon depends on its distance from Earth or, in this case, the spacecraft.) About one-third of all solar eclipses are annular.

"This is only the second annular eclipse Hinode has witnessed since it launched in 2006," says astrophysicist Patrick McCauley of the Harvard-Smithsonian Center for Astrophysics.

The XRT collects X-rays emitted from the sun's corona, the hot, tenuous outer layer that extends from the sun's visible surface into the inner solar system. Gas in the solar corona reaches temperatures of millions of degrees. The energy source that heats the corona is a puzzle. The sun's surface is only 10,000 degrees Fahrenheit, while the corona is more than 100 times hotter.

"We are very interested in studying solar flares," adds McCauley. "Flares are most dramatic in X-rays and we're using the X-ray Telescope to better understand the physical mechanisms that drive flares so that they might someday be forecasted." NASA offers more information here.