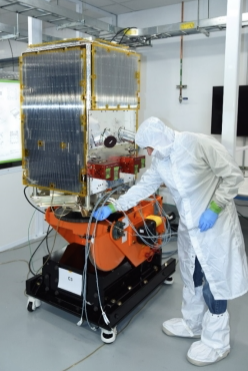 Just as important as hearing a human heartbeat to ensure there is life within a body, so it is when satellites respond accordingly after their launch. And so it is with ...

SSL, a business unit of Maxar Technologies (formerly MacDonald, Dettwiler and Associates Ltd.) (NYSE: MAXR; TSX: MAXR) announced today that six satellites it built for Planet’s SkySat Earth observation constellation launched yesterday and made initial contact with ground stations according to plan. The satellites were launched aboard a Minotaur-C rocket from the Vandenberg Air Force Base, and will begin sending their first images early next week.

Dario Zamarian, group president of SSL stated that SSL takes an innovative approach to small satellite manufacturing, and leverages its agile commercial production capabilities to serve both communications and Earth observation markets, and that it has been a pleasure for SSL to work with the Planet team, and to help support its growing capabilities. Congratulations to all who made the launch a success.

Chester Gilmore, vice president of manufacturing at Planet said that they were pleased to inherit a strong and reliable engineering and manufacturing partner when they acquired the SkySat business, and that working together, SSL has helped them to expand their fleet, increasing their ability to provide timely insights from any location in the world.