Launch Complex 48 at Kennedy Space Center to be Developed


In a feature news item posted at the Florida Today infosite, readers learn that a few feet from the crashing waves of the Atlantic Ocean, Kennedy Space Center's easternmost artery runs along the coast, connecting some of the most significant and active launch pads in the world.

Philips Parkway connects five pads overseen by the U.S. Air Force and NASA; however, a new entrant is joining the fray — Launch Complex 48. 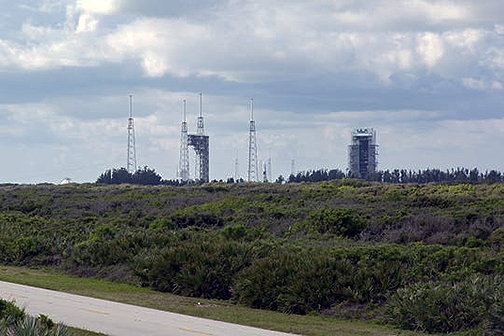 The NASA-developed complex will sit between KSC's pad 39A to the north and Cape Canaveral Air Force Station's Launch Complex 41 to the south, the latter of which is operated by United Launch Alliance for Atlas V rockets. Its target use: commercial companies wanting a pad from which to launch their small rockets.

"This is a NASA capability that is being made available to whatever small launcher company wants to come in here and do small vehicle launches," Tom Engler, KSC's director of planning and development, told FLORIDA TODAY. "It's not designed to handle what you would consider medium-class like (SpaceX) Falcon 9 or (ULA) Atlas V-type launch vehicles."

Slated for completion by the end of the year, LC-48's first phase will consist of a road that intersects with Philips Parkway from the west. The pad itself will have three "prongs," the center of which will be a triangular slab of concrete for companies to roll out their rockets. Two smaller prongs to the east and west will allow for the separation of liquid oxygen tanks from fuel tanks.

The launch pad itself, minus the side storage tanks, would measure 54 feet wide by 42 feet long, according to a NASA environmental analysis completed in February. Maximum liftoff weight for small rockets would be 300,000 pounds and no landings would be allowed.