ILS Launches On A Breeze... And This Makes Five (Launch)

[SatNews] Talk about recycling...this was the 382nd launch for the rocket since the inaugural flight in July 1965, and the 76th launch executed. 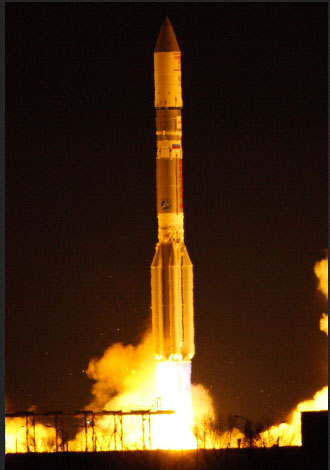 The ILS Proton launched from Pad 39 within the Baikonur Cosmodrome at 00:31 local time today (November 20, 14:31 EST; 18:31 GMT). The ILS Proton vehicle which consists of three stages, used a standard ascent profile to place the orbital unit (Breeze M upper stage and the EchoStar XVI satellite) into a sub-orbital trajectory. From this point in the mission, the Breeze M utilized a standard five-burn mission to perform the planned mission maneuvers to advance the orbital unit first to a circular parking orbit, then to an intermediate orbit. After a 9 hour and 12 minute mission, the Breeze M successfully released the EchoStar XVI satellite into geostationary transfer orbit.

The satellite was manufactured by Space Systems/Loral (SS/L) utilizing their space-proven 1300 platform, weighing over 6.6 metric tons. EchoStar XVI is a powerful direct broadcast satellite (DBS) that is fully leased to DISH Network for use in its Direct-to-Home (DTH) services in the United States. When launched, the satellite will be positioned at 61.5 degrees West longitude. EchoStar XVI is the 24th SS/L satellite launched on an ILS Proton.

This was the 382nd launch for Proton since the inaugural flight in July 1965, and the 76th ILS Proton launch executed. The Proton Breeze M launch vehicle was developed and built by Khrunichev Research and Production Space Center of Moscow, one of the pillars of the Russian Space industry and majority shareholder in ILS.

“With the successful launch of EchoStar XVI, ILS Proton has launched five of the satellites in the EchoStar fleet. We are very proud to have served EchoStar in their expansion over the past ten years,” said ILS President, Phil Slack.