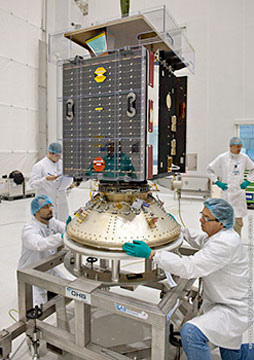 Proba-V is readied to be integrated in the payload “stack” for Vega’s second launch from the Spaceport in French Guiana, which also will orbit the VNREDSat-1 and the ESTCube-1 satellites.
Photo courtesy of Arianespace.
[SatNews] The next Vega to be launched from French Guiana has been delivered to Arianespace, bringing the...

...mission campaign into its final phase for a May 2 liftoff at the Spaceport. The Vega’s handover by launch vehicle industrial prime contractor ELV SpA. follows the well-established preparation process flow that has been used for years in Arianespace missions—with responsibility now given to Arianespace for payload integration, final launcher checkout, countdown, launch and satellite deployment.

This will be Vega’s first mission since the lightweight vehicle’s qualification in February 2012. Demonstrating the launcher’s flexibility, its upcoming flight will carry three passengers: the 160kg. Proba-V spacecraft for the European Space Agency; VNREDSat-1, a 120kg. satellite for Vietnam; and the 1.3kg. ESTCube-1 Estonian student nanosatellite.

The May 2 launch configuration places VNREDSat-1 in the lower portion of the payload “stack,” positioned inside a dispenser called VESPA. ESTCube-1 also is included inside VESPA, with its installation on a flat plate interface. Located atop the VESPA dispenser is Proba-V, which is to be released first during Vega’s in-flight deployment sequence.

After its launch by Vega, VNREDSat-1 will support the Vietnamese government’s initiative to create an infrastructure enabling better studies of climate change effects, improving predictions for natural disasters and optimizing the country’s natural resource management. The spacecraft was built by Astrium on behalf of the Vietnam Academy of Science and Technology.

Proba-V was produced by prime contractor QinetiQ Space Belgium for the European Space Agency and is to monitor global vegetation growth. The satellite is equipped with a newer version of the Vegetation imaging instrument that previously was flown on the Spot series of Earth observation satellites, which also were orbited by Arianespace.

Vega’s upcoming launch is part of multiple missions in the European Space Agency’s VERTA (Vega Research and Technology Accompaniment) program, which is to demonstrate the launch system’s capabilities in orbiting small- to medium-sized satellites. Vega was developed in a European program led by Italy’s ASI space agency and industrial prime contractor ELV SpA. The May 2 mission is designated Flight VV02 in Arianespace’s numbering system, with the first “V” representing the French word for flight (“vol”), and the second letter referring to Vega.