Planet Labs... A Flock Of Doves Fly Out Of The ISS + Become A First Ever (Satellite Constellation) 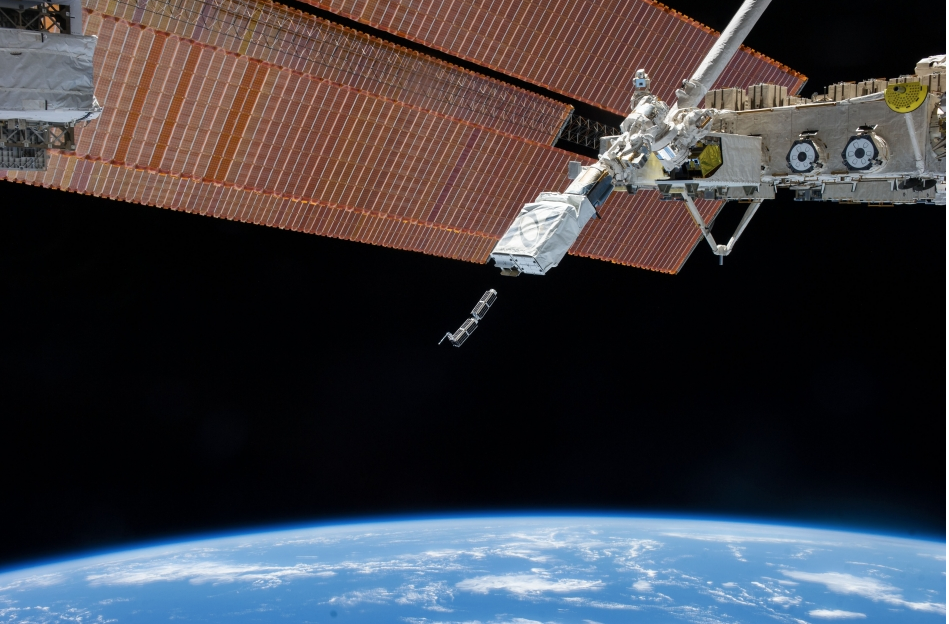 Set of NanoRacks CubeSats Deployed From International Space Station ISS038-E-045009 (11 Feb. 2014) --- The Small Satellite Orbital Deployer (SSOD), in the grasp of the Kibo laboratory robotic arm, is photographed by an Expedition 38 crew member on the International Space Station as it deploys a set of NanoRacks CubeSats. The CubeSats program contains a variety of experiments such as Earth observations and advanced electronics testing. Station solar array panels, Earth’s horizon and the blackness of space provide the backdrop for the scene. Image courtesy: NASA

[SatNews] Considered the largest single constellation of Earth-imaging satellites ever to launch into space...

It is often said that if everyone had the opportunity to see Earth from the perspective of astronauts in space, respect and admiration for our planet would grow and the environment would be better protected. A new fleet of 28 small satellites, called Flock 1, may help provide this perspective to people like never before. Considered the largest single constellation of Earth-imaging satellites ever to launch into space, the Flock 1 satellites began deploying today from the International Space Station.

Built and operated by Planet Labs of San Francisco, the Flock 1 small satellites are individually referred to as Doves. The Dove satellites are part of a class of miniature satellites often called CubeSats. These small satellites will capture imagery of Earth for use in humanitarian, environmental and commercial applications. Data collected by the Flock 1 constellation will be universally accessible to anyone who wishes to use it.

“We believe that the democratization of information about a changing planet is the mission that we are focused on, and that, in and of itself, is going to be quite valuable for the planet,” says Robbie Schingler, co-founder of Planet Labs. “One tenet that we have is to make sure that we produce more value than we actually capture, so we have an open principle within the company with respect to anyone getting access to the data.”

The 28 Dove satellites that make up Planet Labs’ Flock 1 mission, seen here before delivery to the International Space Station, will be the largest single constellation of Earth-imaging satellites ever to launch into space. Image Credit: Planet Labs

The Dove CubeSats use an automated approach where the spacecraft take pictures over various areas, store them, and transmit them when positioned over a ground station. Planet Labs then processes the imagery and uploads it online for anyone to access it. The Flock 1 constellation of satellites may also be used in concert with high-resolution assets like unmanned aerial vehicles and large imaging satellites in order to follow-up on an identified area and gather more imagery in greater detail.

Imagery from Flock 1 enables identification of areas for disaster relief and improved agricultural yields in developing countries around the globe. Users also can apply this imagery resource to global environmental protection measures, such as monitoring deforestation and changes to polar ice caps.

Commercial applications of the imagery include mapping, real estate and construction, and oil and gas monitoring. If a company has high-value, distributed assets that need regular monitoring, Flock 1 imagery can assist in this type of endeavor. For example, Flock 1 can supplement or replace the need for flying a helicopter over an oil pipeline to monitor for a leak, since the 28 Dove CubeSats can quickly collect the necessary imagery. 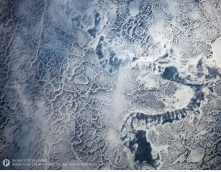 This image of sea ice in the Gulf of Bothnia off the coast of Lulea, Sweden was taken on April 26, 2013 by the Planet Labs Dove 2 satellite, a predecessor of the Flock 1 Earth-imaging constellation of small satellites. Data collected by Flock 1 will be universally accessible. Image Credit: Planet Labs

The revisit rate, or frequency with which Dove CubeSats pass over a given area, is currently unprecedented among existing satellite systems in orbit. Imagery will be collected at latitudes within 52 degrees of the equator, which encompass expanses north and south of the equator that cover the majority of the world’s populated areas and agricultural regions. The Flock 1 constellation will travel in a lower orbit than most satellites, at a distance between 240 and 400 miles above Earth. For comparison, weather and commercial communications satellites are often given geostationary orbits, which are circular orbits above the Earth’s equator at a distance of approximately 22,236 miles above Earth.

The Flock 1 constellation will deploy from the space station using the NanoRacks Smallsat Deployment Program to launch from the station’s Japanese Experiment Module (JEM) airlock. The NanoRacks deployer provides commercial access to space, via the space station, for CubeSats to perform Earth and deep space observation. View the illustrated simulation by NanoRacks to see how these small satellites are deployed into space.

Previous launches of similar CubeSat hardware by Planet Labs served as an extension of their laboratory and optimized the software and hardware to prepare the Dove CubeSats for success. Software for all satellites in the Flock 1 constellation can be reprogrammed very quickly while in orbit.

“Our ability to build and operate spacecraft will allow us to do more with these spacecraft in the future as we begin to think about the satellite segment as a very remote server with a whole bunch of sensors on board that could be reprogrammed to do other things,” says Schingler.

With the existing infrastructure provided by the space station and the various spacecraft that service it, companies like Planet Labs are gaining consistent access to space. Commercial opportunities for CubeSats and other research on and off the space station exist through a public-private partnership enabled by congress in which the station serves as a National Laboratory. The National Laboratory, managed by the Center for Advancement of Science in Space (CASIS), provides funding avenues for programs like the NanoRacks Smallsat Deployment Program to open up research and exploration in space for many more users.

CubeSats like the Doves in the Flock 1 constellation are just the tip of the iceberg. As new CubeSats deploy, more data is gathered, systems are optimized and, eventually, new types of spacecraft are developed based on their predecessors in space. The space station allows for the expansion of commercial ventures in low-Earth orbit. The Earth-imaging mission of Planet Labs’ Flock 1 takes another leap toward creating benefits on Earth resulting from innovation in space.