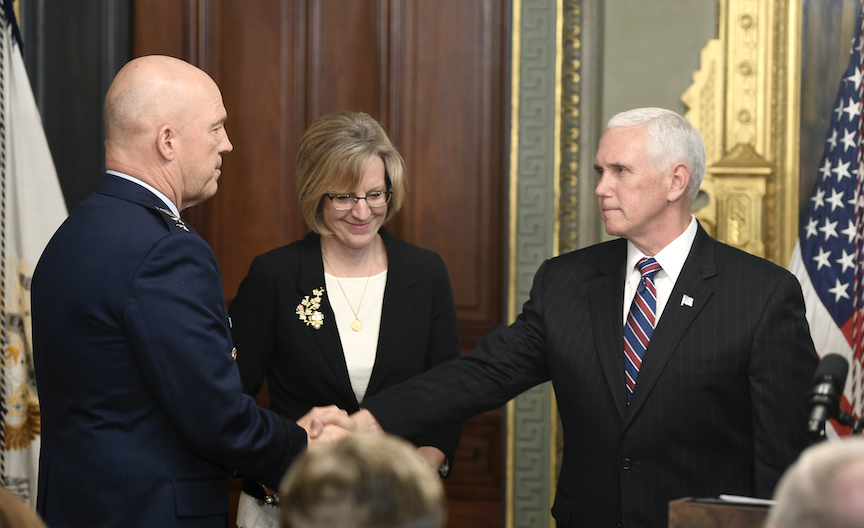 Vice President Mike Pence congratulates Gen. John W. “Jay” Raymond after swearing him in as the first chief of space operations during a ceremony in Washington, January 14, 2020. Photo by Andy Morataya, Air Force.

Raymond was formally designated the first chief of space operations in a formal ceremony sponsored by the White House and held at the Eisenhower Executive Office Building. It came less than a month after the Space Force, by law, became the sixth independent branch of the U.S. military, marking the first time since 1947 that a new military branch had been created.

"The first decision the president made after establishing the Space Force was deciding who should be its first leader," Pence said. "I was around when the President made that decision and I can tell you, he never hesitated. He knew right away there was no one more qualified or more prepared from a lifetime of service than General Jay Raymond to serve as the first leader of the Space Force."

The Space Force was established December 20 when President Donald J. Trump signed the National Defense Authorization Act. He also appointed Raymond to lead the Space Force. Although directed by its own military leadership, the Space Force is nested within the Department of the Air Force.

Raymond noted the historic nature of the moment. "Not only is this historical; it's critical," he said. "That is not lost on me or the outstanding Americans who serve with me."

A major reason for creating the Space Force is the importance of space for both national security and everyday life. It is the backbone that allows for instant communication worldwide, precision navigation and global commerce. The U.S. Space Force will ensure the country's continued leadership in space, Raymond said. Equally important, he added, is avoiding conflict in space. 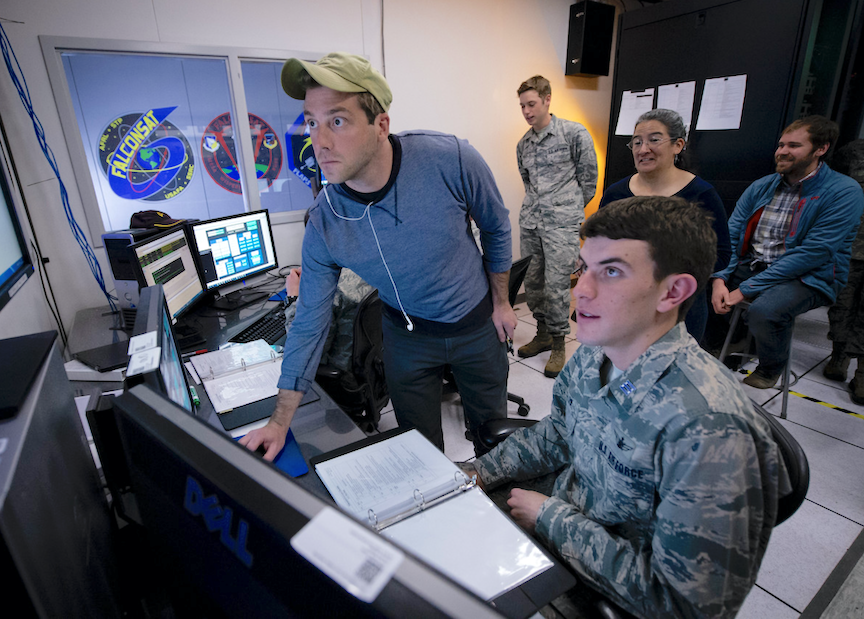 Faculty members and cadets at the U.S. Air Force Academy wait to receive “first contact” from the cadet-designed FalconSAT-6 satellite after its successful launch into space, December 3, 2018. The satellite was attached to a SpaceX Falcon 9 rocket, powered by liquid oxygen and kerosene-based fuel, and is one of 64 satellites aboard the rocket as part of Space Flight Industries’ SSO-A SmallSat Express mission. Photo by Joshua Armstrong, Air Force.

"We want to deter that conflict from happening," he said. "The best way I know how to do that is through a position of strength."

"We are moving forward with alacrity and in accordance with presidential direction, the law, and DOD guidance," Barrett said about the establishment of the new U.S. Space Force. "Directing this effort is the incomparably qualified leader, General 'Jay' Raymond. As a career space officer, he's the perfect person to guide this lean, agile, vital Space Force."

Raymond was the natural choice for the job. He is the commander of the U.S. Space Command; the nation's unified command for space.

Before his new role, Raymond was the commander of Air Force Space Command, which carried the nation's primary military focus on space, managing a constellation of satellites, developing policy and programs and training frontline space operators. Air Force Space Command was redesignated as the U.S. Space Force under the recently passed NDAA.

More broadly, the Space Force is responsible for maintaining the United States' space superiority, even as space becomes more crowded and contested. The NDAA, which created the Space Force, also directs that the Space Force "shall provide the freedom of operation in, from, and to space, while providing prompt and sustained space operations."