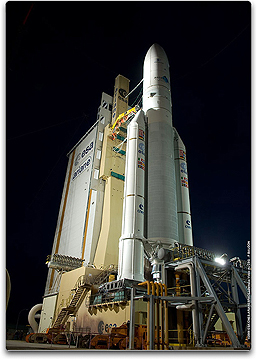 Much activity is taking place as Arianespace's development of its commercial launcher family gains new momentum at the Spaceport in French Guiana to support the sustained mission rate for heavy-lift Ariane 5, and to prepare for future missions of the medium-lift Soyuz and lightweight Vega vehicles. The heavy-lift Ariane 5 is shown prior to its liftoff from the Spaceport’s ELA-3 launch zone.

Ariane 5 is preparing for its second mission of 2009 as the Planck and Herschel space science payloads are now undergoing their checkout in French Guiana for an April 16 liftoff to explore the universe's mysteries. Simultaneously, the Spaceport's new operating base for Soyuz is nearing completion as its launch system is being installed, while the initial service gantry rollout test has been made at the Spaceport's refurbished ELA-1 launch site for Vega.

Planck arrived at Cayenne's Rochambeau Airport aboard a chartered An-124 cargo jetliner on the evening of February 18, and was transferred to the Spaceport's S1B clean room to join the Herschel space telescope, which has been in French Guiana since February 12, for its checkout process.

Planck and Herschel will be launched by Ariane 5 on April 16, marking the first mission of its kind performed by Arianespace at the service of the international space science community.  The two spacecraft will be deployed in very elliptical orbits, enabling both spacecraft to follow transfer trajectories for their 1.5 million kilometer voyage to the second Lagrange point (L2) of the Sun-Earth system.

In parallel, construction of Soyuz' new French Guiana operating site reached a major milestone with the installation start-up for its Russian-developed launch system, which will support and service the vehicle when it is erected for liftoff. 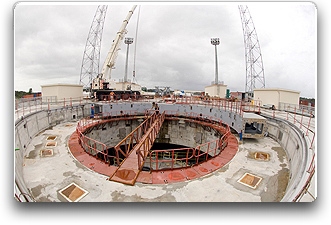 Photo on left: Four of the support crown’s segments are shown after their placement in the inset portion of the Soyuz’ concrete launch pad. The wide-angle camera lens used to take this photo causes some distortion in the background, including the “bending” effect for two of the launch site’s towers that provide protection against lightning strikes. The activity began with placement of the multi-segment "support crown" on the site's concrete launch pad, which was then outfitted with the first of two umbilical masts. This initial mast provides fluids and electrical connections for the launcher's Block I third stage, as well as its Fregat upper stage and the vehicle's payload. A second mast, to be installed later, is shorter and services the Soyuz vehicle's Block A core stage. 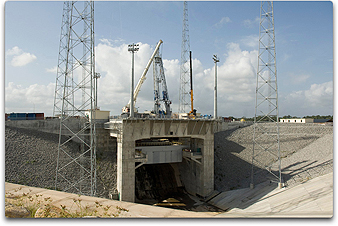 This overview photo on right shows the Soyuz launch site as the umbilical mast is installed on the support crown.  The massive Soyuz launch facility includes the four-level reinforced concrete structure that serves as the launch pad, which is positioned over a 149-meter wide X 123-meter long flame duct.

Preparations for the Vega launch site also are moving forward at the Spaceport, where the facility's mobile gantry has performed its initial rollout evaluation.

This mobile gantry is part of the infrastructure at the Spaceport's ELA-1 launch site, which had been used in the past for missions with Ariane 1 and 3 vehicles. The original facility is being upgraded and updated, with the new gantry meeting Vega's operational requirements. These images on the left show the ELA-1 facility’s mobile gantry moving from its parked location to the operational position around the site’s fixed umbilical mast – where Vega will be assembled on the launch pad.

With this initial rollout test complete, the structure will remain in its operational location for several weeks.  This will allow certain launch pad tasks to be finished, including the completion of work on the umbilical mast, along with the installation of mobile access platforms and fluid supply lines.

For more information on all of these new developments at Europe's Spaceport, visit the Arianespace Website at.