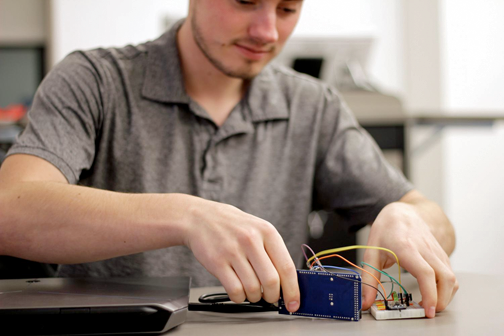 Cougs in Space President Kenneth Eversole, a junior computer science major, shows off part of the satellite called a Central Processing Unit during their weekly meeting. They have to build a stable structure that can stand the radioactivity levels in space.

Photo is courtesy of The Daily Evergreen.

The Washington State University's (WSU) Cougs in Space received a grant from NASA last year and now focus their mechanical efforts on launching of a space satellite — the launch should occur between May 2019 and 2020.

Last year, Cougs in Space applied for NASA’s educational grant, allowing them some flexibility in creating a satellite not specifically meant for research purposes, said Cody Sigvartson, vice president and senior mechanical engineering major. The educational grant also helped speed up the application process because the other option, a research grant, would require a detailed written plan for collected data, Sigvartson said. “We’re focused on building the satellite to NASA’s standards and just launching something into space, which would be huge for WSU.”

According to the article in The Daily Evergreen, the Student Voice of Washington State University, once the club received the grant, Sigvartson and President Kenneth Eversole divided the labor involved in the many complex aspects of building a satellite. They split into six groups: systems, structure, thermal, control and communications, power, and one focused on satellite orientation. Each “team,” as Sigvartson referred to them, has a leader responsible for the group’s tasks.

Members work on how the communication processing systems send and receive messages from other parts of the satellite once it is in space, Sigvartson said. Understanding the complex components of the satellite is vital to its stability. Club member Alex Lambert, a junior mechanical engineering major, is a part of the thermal team and said space is a violent, radiation-heavy environment so the inside of the satellite has to remain completely stable. “Our team learned a lot about how powerful radiation is,” Lambert said, “and then we went from there to figure out what works as far as protection for the satellite.”

The thermal team works alongside the other club teams to perfect the internal communication so when radiation does reach the satellite, they have a plan in place to combat it, Lambert said. This also highlights the importance of teamwork within the club. Jared Strand, a junior majoring in computer science, is a systems team lead and said one of the largest challenges for them to overcome was accepting the skill diversity within the group. “Everyone has different areas of strength,” Strand said. “Since a lot of what we do is based on trial and error, micromanaging all those skill sets can be really stressful.”

Planning for the satellite’s launch also requires an intense use of available resources, especially when the club mostly uses knowledge at their disposal without relying on the internet, Strand said. They have developed contacts within WSU’s Department of Physics and Astronomy and even contacted a NASA official. This type of assistance will help them develop a plan for the project over time while paving an easier road for incoming members once seniors graduate.

“This project has been such a long time in the making, that all we want is to know it’s up there, know that what we did actually worked,” Sigvartson said. “If we could get even a picture from space back to earth, we would be stoked.”