According to a new report, Fleet Management in the Americas, from the IoT market research provider Berg Insight, the number of active fleet management systems deployed in commercial vehicle fleets in North America was 8.0 million in Q4-2017 and that number is forecast to grow far greater.

This Swedish company reports that growing at a compound annual growth rate (CAGR) of 15.6 percent, this number is expected to reach 16.4 million by 2022. In Latin America, the number of active fleet management systems is expected to increase from 3.0 million in Q4-2017, growing at a CAGR of 13.1 percent to reach 5.5 million in 2022.

The top-25 vendors in the Americas together have a combined installed base of more than 7 million active units in the region today. Notably, all of the top-15 players each had more than 100,000 active units in the Americas at the end of 2017. More than 40 percent of the total number of units deployed in the region is represented by the five largest fleet management vendors alone. 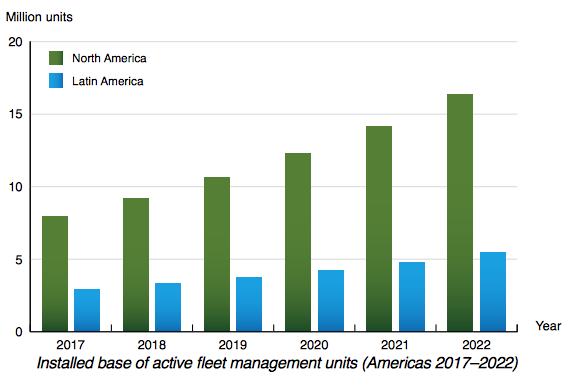 Verizon has in 2018 launched Verizon Connect which represents the culmination of more than US$ 5 billion in investments including high-profile acquisitions such as Fleetmatics and Telogis.

Rickard Anderson, Principal Analyst, Berg Insight stated that Verizon Connect is the clear leader in the fleet telematics space both from a global perspective and in the Americas specifically.

Verizon’s closest competitor in the Americas is Geotab which has grown considerably in the past year, followed by Omnitracs and Trimble which have both surpassed 0.5 million active fleet management subscribers in the region.

Mr. Andersson continued that Zonar Systems rounds off the top-5, just ahead of Michelin which has established a strong position in the Americas through multiple acquisitions (M&A). He adds that the ongoing consolidation trend in the fleet management space is expected to continue in the coming years. Numerous vendors today have more than half a million active FM subscribers worldwide and the milestone of one million subscriptions has now been surpassed by three leading players, driven by growth strategies based on M&A activity and high-pace organic growth.

Andersson concluded that Berg Insight anticipates a future scenario where the global fleet management market is dominated by a handful of solution providers with installed bases measured in the millions.