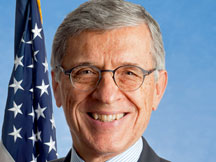 "Thank you all for welcoming me here tonight. More important, thank you for all that your industry does to enrich the lives of people around the world. Everybody knows the indispensable role you play in the gathering and dissemination of video worldwide, but, of course, you provide many other vital services like natural resources monitoring, disaster relief operations, and, increasingly, Internet access.

"It's an exciting time for the satellite industry. Innovation is driving remarkable developments. GSO satellites being built today have about 100 times higher throughput than satellites built just a few years ago. Satellites with a throughput as high as 1 Terabit/s are being promised. In fact, one U.S. satellite company claims that their two new satellites to be launched in a few years will deliver twice the combined capacity of the 400 commercial satellites in use today. New satellite technologies have also enabled more robust broadband mobile services to cars, planes and ships. And with the advent of re-usable launch rockets, the cost of launching satellites may be dramatically reduced.

"Small satellites are lowering costs for satellite-based research and monitoring capabilities, while proposed large constellations of NGSO satellites hold great promise for reducing latency while ubiquitously covering the globe. With the emergence of small satellite technologies, space is within reach of an ever larger number of nations and organizations.

"With these and other technological developments in mind, I want to focus my remarks tonight on two mission-critical goals at the FCC where the satellite industry's actions and engagement are vital. First is assuring that even those in the most remote communities have access to high-speed Internet. And second, making sure that scarce spectrum is used in the most efficient way.

"The pace of innovation is accelerating, and with new technological advances, satellites now have the opportunity to play a much more important role in bringing broadband to underserved and unserved areas around the world.

"It is widely recognized that access to broadband is a powerful motor for lifting people from poverty and reducing economic inequalities. The UN has declared a goal of providing universal and affordable access to the Internet in least developed countries by 2020.

"Secretary Kerry's Global Connect Initiative, seeks to bring an additional 1.5 billion people online by 2020, both by providing broadband directly to end-users, and providing backhaul to the Internet backbone.

"Satellites will be crucial to the success of both efforts.

"Currently, most access to broadband in developing countries is through mobile phone networks. But that still leaves about 4.2 billion people without connectivity—and 95 percent of those who are connected without broadband connections. This is where satellites can play a game- changer role, especially in providing broadband connectivity to places where the ubiquitous coverage offered by satellites is often the only economically feasible means of enabling broadband access.

"To be the answer to the world's tough connectivity challenges, the satellite industry faces significant challenges, one of which is regulation. Adapting regulations to ensure they donít stifle new technologies is crucial.  Greg Wyler once told me that "physics is easy, policy is what's hard."

"So it's more important than ever that we at the FCC get regulation right. Both to ensure that satellites meet their full potential to provide the many essential services they have historically provided, as well as their new promise of expanding broadband connectivity, AND to ensure that spectrum is used in the most efficient way possible.

"To enable continued innovation in this industry, the FCC has worked very hard to ensure our satellite regulations are streamlined and reflect the reality of how satellites operate and are licensed here in the United States, and internationally.

"As we all know, one way you can prevent policy-making from being unnecessarily hard is for industry to be out front proposing regulatory frameworks that effectively reflect technological and economic realities.

"The comprehensive Part 25 streamlining order last December provides a good model of how industry and regulators can work together to identify unnecessary or burdensome regulations, and develop practical, effective solutions.

"The FCC is committed to helping facilitate broadband deployment by satellites, and we will continue to work with SIA and its member companies to creatively develop policies, quickly process applications, and solve technical issues that will serve that goal.

"We all recognize that perhaps the most daunting challenge you face is a constrained spectrum environment—how satellites will be able to coexist not only with each other, but also with other uses.

"That brings me to the second FCC priority I previewed earlier: promoting the efficient use of spectrum and maximizing the value of this scarce resource.

"The Commission's spectrum agenda is at a hinge moment.

"Obviously, there has been a flurry of spectrum-related actions over the past several years at the Commission—and the latest focus of our wireless agenda is the upcoming incentive 3auction. With the incentive auction finally upon us in 22 days, it's fair to ask what the next focus of the FCC's terrestrial spectrum agenda will be. The answer is clear: 5G.

"I recently returned from the Mobile World Congress in Barcelona, where the 5G buzz was everywhere. In South Korea the plan is to have functional 5G trials to coincide with the 2018 winter Olympics. Japanese companies have similar plans during the 2020 summer games in Tokyo. The EU has committed 700 million Euros toward 5G research and development.

"The United States approaches the kind of opportunity 5G presents somewhat differently from other countries. We do it by indicating which spectrum will be made available and then relying on a private sector-led process for producing technical standards best suited for those frequencies.  We won't wait for the standards to be first developed in the sometimes arduous standards-setting process or in a government-led activity.

"Our experience with 4G using this approach has been positive. We became the incubator for 4G innovation. Our mobile apps economy created hundreds of thousands of jobs, and U.S. software and hardware is at the heart of 4G networks around the globe.

"The benefits of this innovation extend to the satellite industry, where commercial off-the- shelf products have helped to lower costs and fuel innovation, for example in the small satellite sector.

"The Commission is determined to build on this great success story and capitalize on the 5G opportunity. Let me be very clear. The success of high-bandwidth 5G is in the national interest of the United States and is a national priority.

"In recognizing the importance of 5G to every sector in our economy, we are in accord with the rest of the world.  In recognizing 5G as a national priority for the United States, we set our challenge: we must lead the world.

"Our rulemaking proposal to utilize the 28 GHz band is a good place to start. I understand—and agree—that this is an important band for the satellite community, where you enjoy secondary usage status. But it was beyond disappointing to see the satellite industry work so hard to block the ITU from even studying 5G at 28 GHz at the recent WRC in Geneva.

"Such intransigence was frustrating. I do not believe it was in the satellite industry's interest to stop the ITU from even exploring sharing at 28 GHz. This is especially true when the U.S. and other countries interested in being leaders in 5G are already committed to developing sharing in that band.

"It would have made more sense to have that study take place in a setting where the satellite industry is an experienced and active participant in the process.

"The clear plan for the United States and other countries is to roll up our sleeves to make sharing possible in these bands.

"My preference would be for the satellite industry to work with the mobile industry and quickly come back to us with realistic sharing ideas for the coexistence of satellite and mobile in these upper bands. And quickly means now.

"Industry-driven win-win solutions that protect your existing and contemplated satellite services, while also enabling new terrestrial offerings—are likely to find regulatory favor. Claims that sharing is impossible are not.

"Those claims are particularly unpersuasive today ñwhen satellite companies are seeking to deploy their licensed spectrum for terrestrial use. And in the process, insisting that sharing is both technically feasible and decidedly in the public interest. To this non-engineer, this seems completely inconsistent with claims that sharing is impossible.

"I understand there already have been discussions between the satellite industry and some terrestrial mobile operators and manufacturers to come up with a solution that all parties can live with. And I'm encouraged to see some options presented in the Spectrum Frontiers record.

"But let me underscore that we plan to act on the Spectrum Frontiers proceeding this summer, so time is short. I strongly encourage SIA member companies to explore these sharing opportunities with the terrestrial industry—quickly and seriously. This will require the industries to work diligently to resolve the technical details necessary for sharing scarce spectrum across the spectrum chart, so that a variety of technologies can work together in deploying broadband and maximizing the benefits of high-speed connectivity.

"I am convinced that terrestrial and satellite systems can work effectively together to share these bands, and both can flourish—a conviction reinforced by the fact that our defense agencies have found ways to accommodate sharing with commercial interests.

"As someone who has spent decades practicing before the Commission, and now finds himself on the other side of the table, I offer a bit of hard-earned experience: it is far more practical to get on the train than to be run over by it.

"The satellite industry deserves almost endless kudos for what it has accomplished to date. Now it has a critical role to play in bringing broadband services to the billions of unserved or underserved people, as well as the national priority next-generation services.

"My colleagues and I at the FCC look forward to working with you to facilitate new generations of innovative satellite offerings that will benefit users throughout the world. Thank you."