Ten additional Iridium® NEXT satellites have been launched by SpaceX from Vandenberg Air Force Base in California to their orbits — the push to space occurred at 7:13 a.m. today (Friday, March 30, 2018).

Approximately one hour after the launch, the satellites were successfully deployed.

A previously launched Falcon 9 rocket was the vehicle used for this event, the fifth in a series of eight launches for Iridium. The SpaceX rocket had been previously cast as the vehicle in the launch of the Iridium-3 mission from Space Launch Complex 4E last October. The  Iridium NEXT constellation is scheduled to be completed later this year at a cost of approximately $3 billion — the plan is for a total of 75 satellites comprising the constellation, placed via eight launch events.

The Merlin engine in operation as the SpaceX Falcon 9 carries 10 Iridium NEXT satellites to orbit. Image is courtesy of SpaceX.

Although no first-stage booster recovery is planned by the company for this Iridium-5 mission, SpaceX will attempt to capture the rocket's fairing using what has been generically termed a "catchers mitt" net that was installed on the ship (named "Mr. Steven"), developed to enfold the nose cone prior to ocean envelopment. 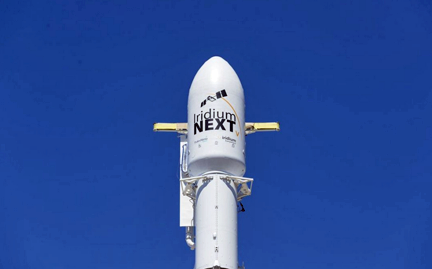 Iridium will be empowering their new Iridium CertusSM service platform through the NEXT satellites to deliver enterprise-grade services across the globe, supporting HD video, low-bandwidth data apps, email and full internet access. Iridium has stated that their service will also be able to scale to meet the needs of any business with a variety of high-value services.

The official Iridium release of this launch event follows...

Iridium Communications Inc. (NASDAQ: IRDM) announced today that at 7:13:51 am PDT (14:13:51 UTC), SpaceX successfully launched the fifth set of 10 Iridium NEXT satellites into orbit from Vandenberg Air Force Base in California.

All 10 new satellites have successfully communicated with the Iridium Satellite Network Operations Center and are preparing to begin testing.  Shortly before launch, the Iridium network met a major milestone as it surpassed 1 million active subscribers. This continues a trend of significant growth and serves as a testament to the reliable, resilient and uncompromising nature of the Iridium network.

Paving the way for Iridium’s growth is the Internet of Things (IoT), where Iridium has established itself as the satellite network of choice to keep “things” connected beyond the limits of cellular coverage.  More than half of the subscribers on the Iridium network are IoT devices, delivering a wide variety of solutions by hundreds of licensed technology partners. These devices are designed to do everything from tracking endangered species and monitoring power lines to controlling shipping container temperature levels or serving as tsunami warning systems. 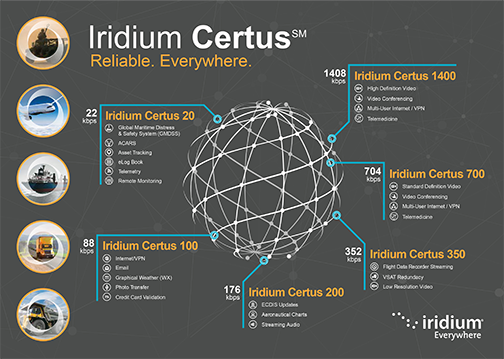 Further positioning the company for success is the Iridium NEXT satellite constellation, which is now well more than half way completed. Once fully deployed later in 2018, the constellation will blanket the entire earth with its new capabilities like the Iridium CertusSM L-band broadband service and AireonSM global aircraft surveillance and tracking.

To date, Iridium has completed five launches of 10 Iridium NEXT satellites, all with SpaceX from Vandenberg Air Force Base in California. A total of eight Iridium NEXT launches are currently planned with SpaceX delivering a total of 75 new satellites to orbit. In total, 81 satellites are being built, with 66 in the operational constellation, nine serving as on-orbit spares and six as ground spares.

The first stage booster for today’s launch was previously flown during Iridium-3 in October 2017, making this the second Iridium NEXT launch to use a flight-proven Falcon 9 rocket.  Each launch strategically delivers new satellites to specific orbital planes to ensure the earliest possible completion of the constellation. The Iridium network is comprised of six polar orbiting planes, each containing 11 operational, crosslinked satellites, for a total of 66 in the active constellation.  The 10 Iridium NEXT satellites launched today were successfully delivered to orbital plane one where they will replace first generation satellites over the next 30 days.

Iridium NEXT is the company’s $3 billion, next-generation, mobile, global satellite network scheduled for completion in 2018. Iridium NEXT will replace the company’s existing global constellation in one of the largest technology upgrades ever completed in space.  It represents the evolution of critical communications infrastructure that governments and organizations worldwide rely on to drive business, enable connectivity, empower disaster relief efforts and more.

“It’s a unique coincidence that we passed the one million subscribers mark right at this launch, and it’s particularly exciting because we’ve surpassed this milestone earlier than we had anticipated,” said Matt Desch, chief executive officer at Iridium. “The new satellites and services we’re lau nching and continued strong subscriber growth are cementing our position as an industry leader and critical global communications platformand underscore the significant transformation we’ve undergone as a company over the last 10 years. This truly is a testament to the trust our partners and customers have in our network, which is only going to continue growing as the deployment of the Iridium NEXT constellation nears completion.”

For more information about Iridium NEXT, please visit www.IridiumNEXT.com