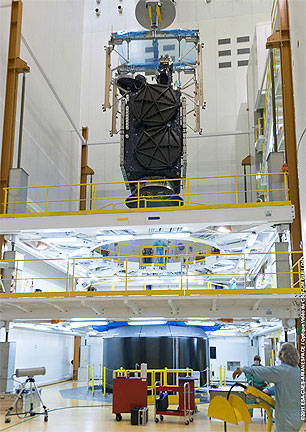 The ST-2 is lowered into position on the SYLDA dual-payload dispenser inside the Ariane 5’s Final Assembly Building in French Guiana. Photo courtesy of Arianespace.
[SatNews] Arianespace's third Ariane 5 flight of 2011 has entered its final preparations.

The installation of the ST-2 satellite on the launcher's SYLDA dual-passenger dispenser system has now been accomplished, positioning it for the upper slot of the mission's payload "stack." This activity occurred in the integration area of Ariane 5's Final Assembly Building at the Spaceport, readying it for hoisting atop the launch vehicle once its GSAT-8 lower passenger has been installed. ST-2 and GSAT-8 will be orbited on the heavy-lift mission scheduled for the evening of May 19 from French Guiana, maintaining Arianespace's launch pace for 2011.

With a liftoff mass of 5,090-kg., ST-2 will be the second Mitsubishi Electric Corporation-built satellite orbited by Arianespace. The relay platform uses the company's DS2000 satellite bus, and it marks this Japanese manufacturer's first entry in the commercial telecommunications satellite market outside of the home market. ST-2 will be used by the ST-2 Satellite Ventures joint company of Singapore Telecommunications Ltd (SingTel) and Taiwan's Chunghwa Telecom Company Ltd. for Ku- and C-band relay services across the Middle East, Central Asia, India and Southeast Asia. It is to succeed the ST-1 spacecraft, launched by Arianespace in 1998. The Ariane 5 mission's GSAT-8 co-passenger weighs 3,100 kg. for liftoff, and is configured with 24 transponders to augment India's Ku-band relay capabilities. This Indian Space Research Organisation-built satellite uses the manufacturer's I-3K satellite bus, and also carries the two-channel GAGAN (GPS and GEO augmented navigation) system for assisting the navigation of aircraft over Indian airspace and in adjoining areas.