[SatNews] Aerojet, a GenCorp (NYSE: GY) company, announced today that it has signed an agreement with NEC Corporation (TSE:6701) to jointly supply HAYABUSA-derived ion propulsion systems for the U.S. and Japanese aerospace markets. These ion propulsion systems provide significant advantages for geosynchronous satellites and deep space missions through fuel efficiencies over 10 times higher than those of conventional propulsion systems.

The HAYABUSA spacecraft successfully recovered a sample collection capsule which might contain a first-ever sample of an asteroid to earth on June 13 after a seven year journey. The ion propulsion system first powered the spacecraft on its 186 million mile journey to the surface of the asteroid Itokawa. Then, after a near catastrophic failure of the chemical propulsion and attitude control systems, with ingenuity and persistence, Japanese engineers used the ion propulsion system to recover the mission and return the sample. The HAYABUSA ion propulsion system was developed jointly by the Japan Aerospace Exploration Agency (JAXA) and NEC. The system uses microwaves to ionize the propellant and carbon fiber grids to accelerate it, enabling long life and high mission reliability. 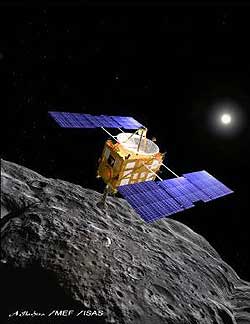 Artist's conception of the Hayabusa spacecraft deploying one of the surface target markers that will be used to guide the spacecraft's descent to the surface of asteroid Itokawa.
"We congratulate NEC and JAXA on the successful and historic return of the capsule of HAYABUSA," said Julie Van Kleeck, Aerojet's vice president of Space and Launch Systems. "We are very excited by the opportunity to work with NEC to provide this system to a broader market." Aerojet's electric propulsion products are currently flying on more than 150 operational satellites.