[SatNews] The ground has shaken with more than 700 earthquakes of magnitude 3.0 or stronger; at least 60 have been above magnitude 5.0.

Now in its third month, the fissure eruption at Iceland’s Holuhraun Lava Field has spread molten rock across 70 square kilometers (27 square miles), an area slightly larger than Manhattan Island (New York). The ground has shaken with more than 700 earthquakes of magnitude 3.0 or stronger; at least 60 have been above magnitude 5.0. With nearly a cubic kilometer of lava poured out so far, it is the largest eruption in Iceland since Laki in the 18th century. 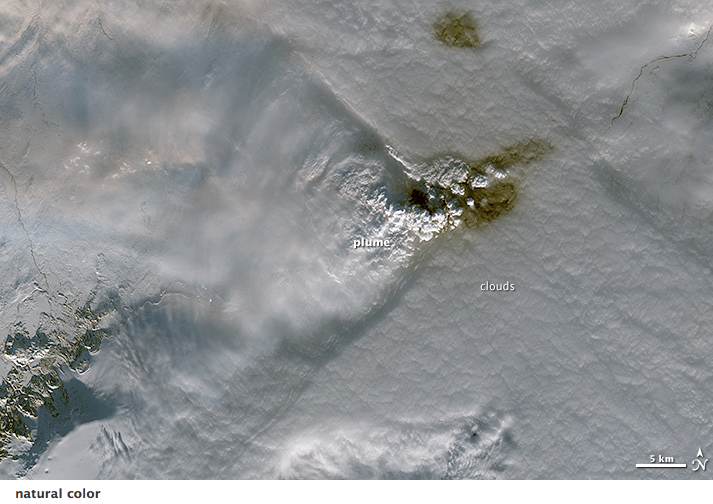 While emissions of ash have been relatively modest, researchers from the University of Iceland and Icelandic Met Office estimate that 450 kilograms of sulfur dioxide (SO2) are being emitted from Holuhraun each second, or 40,000 to 60,000 tons per day. Since the start of the eruption, Holuhraun has emitted twice as much SO2 as all of industrialized Europe emits in a year, according to Nature magazine. Calm winds in recent days have allowed the SO2 to accumulate over the island and has led health officials to warn against outdoor activity, particularly for people with respiratory issues. The emissions also have scientists wondering about the long-term effects of sulfur exposure on humans, plants, and animals.

The Operational Land Imager (OLI) on the Landsat 8 satellite acquired these images of the Holuhraun eruption on November 9, 2014. The top image is natural color, and the lower image is a combination of green, near-infrared, and shortwave infrared light. In the false-color image, lava glows bright red and yellow while clouds, snow, and ice are various shades of blue-green. 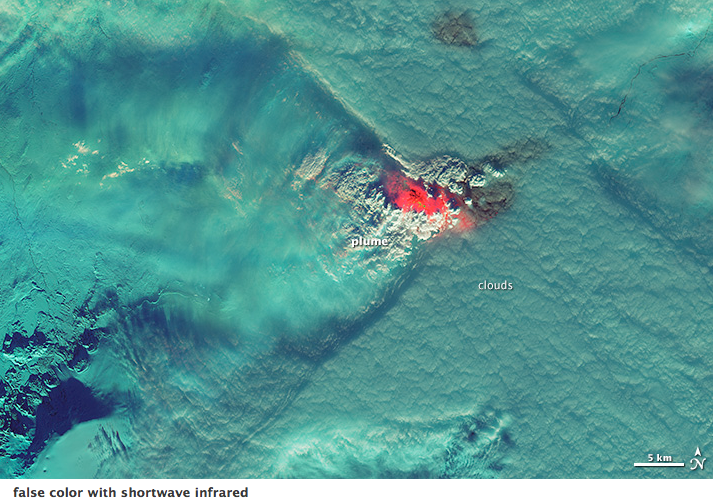 The flow field of the hot lava appears dark brown and black through the cloud cover in the natural color image; it also shows up as a darker patch in false color. Some of the dark area might also be snow or ice that is discolored by volcanic emissions.

Low clouds hover to the north, east, and south of the volcano, mostly below the level of the summit. Above the summit, a volcanic plume and a rising mass of cumulus clouds extend upward and throw shadows on the thinner, lower clouds; the plume grows more diffuse as it trails off to the west. Ralph Kahn, an atmospheric scientist at NASA’s Goddard Space Flight Center (GSFC), proposed that these clouds could have been generated by volcanic heating of the atmosphere and from water vapor emitted by the volcano.

The cloud cover does not extend to the west, appearing almost as if it were stopped by the volcano and the plume of steam, sulfur dioxide, and ash. “Is there any relationship? Is the cloud deck moving from east to west, and the satellite just happened to capture an image at the instant when the clouds reached the volcano plume?” said Santiago Gasso, an atmospheric scientist at NASA’s GSFC. “Or when the cloud deck slips under the plume, is it actually disappearing from an effect of the volcanic cloud aloft? While the latter would be a very interesting proposition, we would need more data to confirm it.” 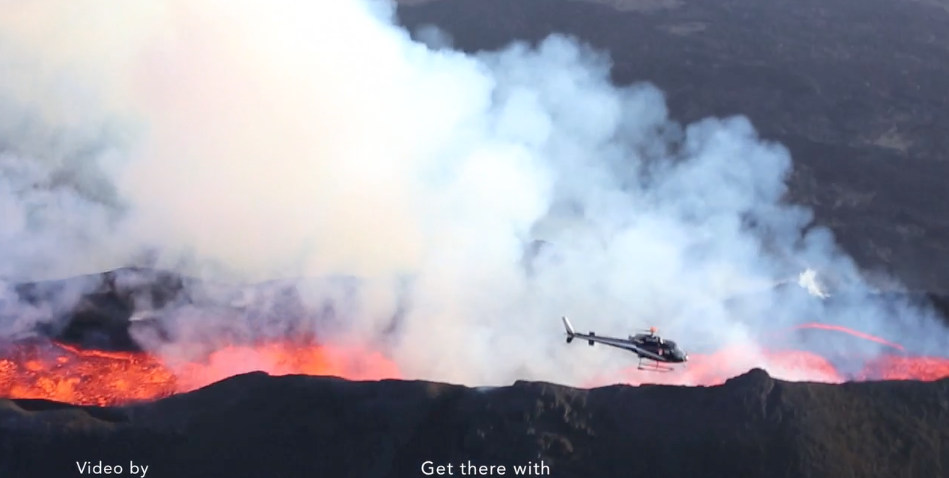 You can see incredible aerial footage of the roiling lava by visiting this page.