[SatNews] “The president of the United States made very clear that the North Koreans should not do this. It is provocative. It’s dangerous and it violates the international law....we have to be fully prepared for any possibility—and we are.” 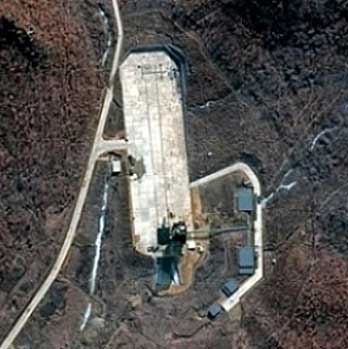 This is a DigitalGlobe 50cm resolution natural color image of the North Korean launch site at Tongchang-ri. Image (c) 2012 DigitalGlobe, Inc. DigitalGlobe imagery taken today can confirm a higher level of activity within the overall facility and significant activity at the launch pad specifically. This activity appears consistent with preparations for a satellite launch. Providing a virtual presence is what DigitalGlobe does best, by rapidly delivering shareable, high-resolution imagery to provide up to date coverage of events on the ground.

The Pentagon activated its new U.S. ground-based global missile shield in anticipation of North Korea’s launch of a long-range missile, according to defense officials.

The measures include stepped-up electronic monitoring, deployment of missile interceptor ships, and activation of radar networks to areas near the Korean peninsula and western Pacific.

Three interceptor ships near Japan and the Philippines, as well as U.S.-based interceptors, are ready to shoot down the North Korean missile if space-, land-, and sea-based sensors determine its flight path is targeted at the United States or U.S. allies, said officials who spoke on condition of anonymity.

The Obama administration will regard any launch by North Korea as a violation of U.N. Security Council resolutions regardless of whether the North Koreans claim the rocket test is for space launch purposes, the officials said. The technology and rocketry used for a space launch is nearly identical to that used with ballistic missiles that carry a warhead, they said.

Also, because the payload or warhead of the test launch cannot be determined prior to launch, the Obama administration decided to activate the missile defense system.

According to U.S. officials, current intelligence assessments indicate the North Korean missile will be launched from a base called Tongchang-ri, located on a west coast peninsula north of Pyongyang between April 12 and April 15.

The missile’s first stage could impact in the Yellow Sea near South Korea and the second stage could land east of the Philippines in the Pacific.

Pentagon spokeswoman Lt. Col. April Cunningham would not say if missile defenses were activated for the upcoming test.

However, Cunningham said, “North Korea’s announcement that it plans to conduct a long-range missile launch at any time would be in direct violation of its international obligations.”

“Such a missile launch would pose a threat to regional security and would also be inconsistent with North Korea’s recent undertaking to refrain from long-range missile launches,” Cunningham said.

“The U.S. closely monitors threats to international security and has the capability to respond if and when appropriate.”

A U.S. official said the military’s large, X-band radar that is based on a oil-rig-sized floating platform sailed from Honolulu to waters near Korea on March 26 as part of the activation.

Current U.S. missile defense systems include networks of radar and space tracking gear, including ground- and sea-based radar, Aegis ships, and long-range interceptor missiles based in Alaska and California. A total of 30 three-stage interceptors are deployed.

Any decision to shoot down the missile would be made by the president, officials said.

The missile defense activation was briefly mentioned by Defense Secretary Leon Panetta on Saturday during a meeting with reporters aboard the Navy ship USS Peleliu. Asked what military steps were taken to deal with a future North Korean launch, Panetta said the U.S. has “put whatever assets in place that we need in order to deal with any contingency.”

“We expressed our concern,” Panetta said of the upcoming launch. “The president of the United States made very clear that the North Koreans should not do this. It is provocative. It’s dangerous and it violates the international law. And so our hope is that they will not do it. But as always takes place in these kinds of situations, we have to be fully prepared for any possibility—and we are.”

Details of the missile defense deployments are classified. However, defense officials said the measures include the stationing of three Navy Aegis-equipped warships around Japan that are equipped with SM-3 missile interceptors. The U.S. missile defense deployments are being closely coordinated with Japan’s government and military, which has deployed two Aegis ships armed with SM-3s, along with Patriot PAC-3 anti-missile batteries around Tokyo.

Japan’s concern is that if the missile goes astray or breaks up, it will target Japanese territory, and the shorter-range defenses will be used to try and shoot down the debris before impact.

North Korea has announced that it is planning a space launch of a satellite. But U.S. officials said the missile being readied on a launch pad north of the capital of Pyongyang appears similar to North Korea’s Taepodong-2 intercontinental ballistic missile.

U.S. officials also said that regardless of the configuration, the launch is likely cover for a missile test since U.N. sanctions prohibit North Korea from launching missiles.

According to the officials, the initial phases of the U.S. missile defense activation include stepped-up intelligence gathering by spy satellites and RC-135 Cobra Ball aircraft based at Kadena Air Base in Okinawa, Japan.

Asked for details, a U.S. official would say only that “We’ve got what we need to monitor a possible launch.” Cmdr. Leslie Hull-Ryde, a second Pentagon spokeswoman, declined to provide details on the North Korean launch preparation but said, “We’re monitoring the situation very closely, along with our [Republic of Korea] counterparts, to ensure the defense of the ROK.”

“Through our combined capabilities, we can sufficiently monitor North Korea’s efforts,” she said.

Hull-Ryde declined to discuss military operations, plans or intelligence but said, “We stand ready to defend U.S. territory, our allies and our national interests.” The last time missile defenses were activated on the current scale was 2009, when North Korea conducted a test flight of a Taepodong-2 on April 5.

Prior to that launch, also announced by Pyongyang as a space launch, the Navy deployed two Aegis ships in the Sea of Japan and one Aegis east of Japan, according to a State Department cable made public by Wikileaks. Also, in 2009, the military shared ballistic missile data with Japan from the Shared Early Warning system and the AN/TPY-2 X-band radar located at Shariki, Aomori, Japan. The Seventh Fleet and the Japan Maritime Self Defense Forces carried out aegis ship data sharing.

The North Korean missile’s likely flight path could take it over Okinawa.