Astrium... From Shipping To Prepping (Satellite) 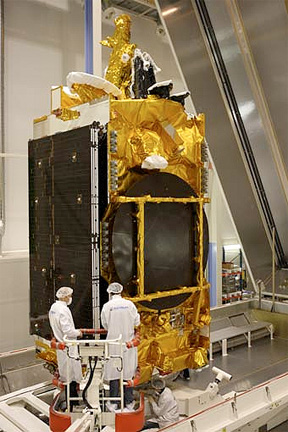 Image of the Y1A is courtesy of Astrium
[SatNews] The Yahsat first satellite Y1A, built by Astrium and Thales Alenia Space, has left the Astrium facilities in Toulouse, France, and was transported by air to Kourou, French Guiana, in preparation for its launch by an Ariane 5 vehicle in March 2011.

Y1A is the first satellite built for Al Yah Satellite Communications Company (Yahsat) by an industrial team of Astrium and Thales Alenia Space acting as co-prime contractors as part of a turnkey two-satellite system contract led by Astrium. Astrium supplied the Eurostar E3000 platform and assembled and tested the spacecraft. Thales Alenia Space supplied the communications payload operating in C-, Ku- and Ka-bands. Thales Alenia Space is also in charge of the launcher procurement. The Launch and Early Orbit Phase will be conducted from the Astrium spacecraft control centre in Toulouse. Y1A will have a launch mass of 6,000 kg and a spacecraft power of 14kW at the end of its 15-year designed lifetime.