NASA Ole! It's Curiosity That Transports Spain To Mars (Launch) 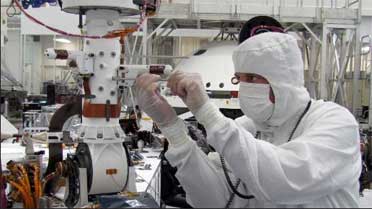 [SatNews] Learning more about Mars will provide information to determine if the planet could support life, let alone tracking all that red dust indoors.

NASA’s new Mars rover, ‘Curiosity’, will be launched on November 25 from Cape Canaveral in Florida on an Atlas V rocket. Dubbed the Mars Science Laboratory (MSL), the main objective of this mission is to assess Mars’ ‘habitability’, in other words whether the planet is or ever was able to support microbial life.

Aboard the vehicle are two key mission systems developed and built by Astrium in Spain under bilateral collaboration agreements between NASA, the Spanish Centre for Industrial Technological Development (CDTI) and the Spanish National Institute for Aerospace Technology (INTA).

Astrium, from its facility at Barajas, was prime contractor and built the High Gain Antenna System, a steerable antenna capable of transmitting information in specific directions which will enable the rover to communicate directly with the Earth from the Martian surface. The system includes a flat bidirectional antenna and its tracking mechanism.

The advantage of a steerable antenna is that there is no need to reorient the rover itself in order to ‘speak’ with the Earth, thereby saving energy. This device will be used to send scientific data from the different instruments as well as information about the ‘health’ of the rover itself, and also to receive the instructions it needs to perform its mission without the need for intermediate links or orbiters.

The signals will be received on Earth by the Deep Space Network, consisting of three communications complexes located around the world, one of which is at Robledo de Chavela near Madrid. The antenna design is based on the technology of radiating arrays in X-band developed by Astrium, which has been successfully tested on previous satellites such as Spainsat, Envisat and most recently Galileo.

Meanwhile, the Astrium Tres Cantos site developed the REMS (Rover Environmental Monitoring Station), which will provide daily weather reports for the rover’s area of operation. The station is equipped with multiple sensors to measure parameters such as atmospheric pressure, relative air humidity, ultraviolet solar radiation, wind speed and direction (including vertical movements) and air and ground temperatures. The aim is to characterize the climate and geology of Mars, laying the foundations for possible future human exploration missions. The development of the meteorological station has been directed by the Spanish Centre of Astrobiology (CSIC-INTA).

As Antonio Cuadrado, CEO of Astrium in Spain, explains: “There are multiple technological challenges involved when sending a vehicle to Mars and Astrium has helped to strengthen Europe’s role in the field of space exploration by successfully developing key technologies to ensure an active presence in these ambitious projects.” The conditions on Mars and the nature of the MSL mission require the rover’s space systems to meet especially stringent standards. Some units will be exposed to operating temperatures ranging from -130 to 50 degrees Celsius, while external factors such as dust and wind have even required the design of specific protective systems for certain exposed sensors.

Moreover, the communications will not be instant due to the large distances involved. Although electromagnetic waves travel at the speed of light there will still be significant delays in the arrival of information; light takes a little over three minutes to travel between Earth and Mars at the minimum opposition distances between the two planets, while in certain periods this time lag may reach up to 22 minutes. The journey to Mars will take approximately take nine months.