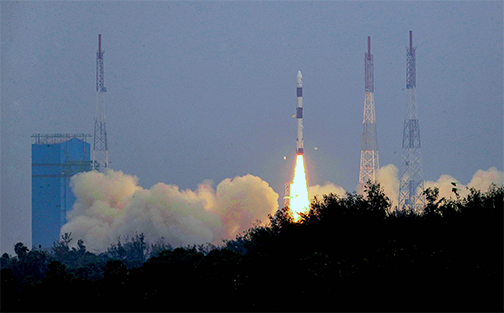 Lift-off of PSLV-C43 — HysIS Launch, with Kepler's CASE
smallsat aboard. Photo is courtesy of ISRO.

Kepler’s latest satellite within the company’s network will be used to deliver service to early customers. The first satellite was launched in January 2018. Both satellites carry a Ku-band payload onboard that is used for wideband connectivity. The third satellite will launch in 2019 and will provide narrowband connectivity for the Internet of Things (IoT) devices.

The lessons learned from almost a year of operating the first satellite were incorporated into the development of the second to improve the reliability. Kepler has already demonstrated a capability to deliver upwards of 40 Mbps to 60 cm. diameter VSAT and more than 300 Mbps to Kepler’s 3.4m gateway in Inuvik, Canada. Kepler also became the first company to use a wideband LEO satellite to acquire, track, and communicate with an electronically-steered antenna when Kepler and Phasor performed their collaborative demonstration. 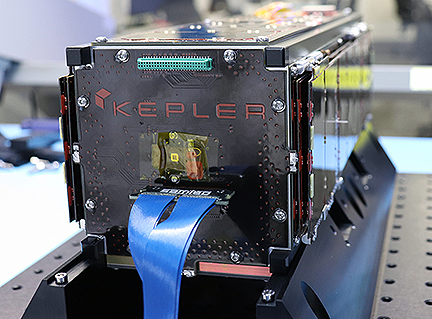 Photo of the CASE smallsat. Photo is courtesy of Kepler Communications.

As Kepler builds out the capabilities on their satellite infrastructure, the company is also adding capacity on their ground segment. In addition to their gateway deployed in Inuvik, Canada, Kepler has also recently deployed ground stations on Svalbard and in New Zealand. As new ground stations and gateways are added, Kepler is able to increase the reliability of their communication service and decrease the latency of customer data delivery.

CASE was built in collaboration with ÅAC Clyde and Bright Ascension Ltd. The satellite payload is Kepler's proprietary software defined radio and antenna that uses Enclustra and AHA (of Comtech EF) components. The Kepler ground support network was built in collaboration with Comtech EF Data, Kongsberg Satellite Services, and Innovative Solutions in Space. The satellite was launched by Antrix Corporation Ltd., a wholly owned Government of India company, with the support of ISED, Canada for licensing.

Kepler’s ultimate goal is to deliver in-space connectivity to address the data need from space faring assets, and support the future space economy. However, Kepler’s network currently focuses on delivering wideband and narrowband connectivity. With this launch on the back of receiving FCC market access authorization and the announcement of Kepler’s 16M USD Series A round of financing, the company is well poised to take a leadership role in LEO communications.

Mina Mitry, CEO of Kepler, said this is an exciting month for Kepler. Following the company's recent FCC approval, the successful launch of the firm's next satellite marks an important milestone for the team to deliver Kepler's network on schedule. This is but the start of an upcoming and regular launch cadence. The company continues to increase network capacity and deliver a more persistent, reliable, service to our customers every step a long the way.