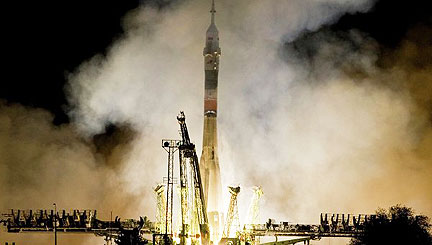 A Soyuz spacecraft carrying Russian cosmonaut Dmitry Kondratyev, NASA astronaut Catherine Coleman and European Space Agency astronaut Paolo Nespoli is due to dock with the international orbiter at 20:12 GMT on Friday. The new ISS crewmembers blasted off from the Baikonur space center in Kazakhstan on Wednesday and will stay on board the space station for at least 152 days. There is no suggestion of any danger to the astronauts on the space station or in the Soyuz, but it is the latest of a series of glitches with Russian spacecraft this year. There have been problems docking or undocking from the ISS, while earlier this month, a Russian Proton rocket, which is not used in the human spaceflight program, failed to deliver three Glonass satellites into orbit. The DM-3 upper stage booster carrying the satellites fell into the Pacific Ocean to the northwest of Hawaii.