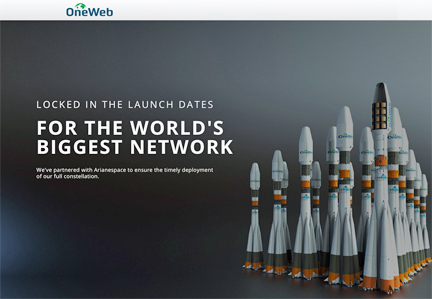 [SatNews] OneWeb, which is building a new global communications system to create affordable broadband services for all, has raised $500 million of funding from a group of leading international companies.

Sunil Bharti Mittal, Founder and Chairman of Bharti Enterprises and Tom Enders, CEO of Airbus Group, will be joining Sir Richard Branson, founder of the Virgin Group, Dr. Paul Jacobs, Executive Chairman of Qualcomm Incorporated, and Greg Wyler, founder of OneWeb, on the Board of Directors. Each of the other founding shareholders, who will also be Board observers, will continue to advise the company and support the program directly through provision of technical and manufacturing expertise, launch capabilities, and enabling access to potential customers.

Following the announcement on June 15 of its joint venture with Airbus Group (pending regulatory approvals) to design and manufacture its first 900 microsatellites, OneWeb today also announces the largest commercial rocket acquisition ever of more than 65 rockets including 21 Soyuz launch orders from Arianespace and 39 launches from Virgin Galactic’s LauncherOne.

“The dream of fully bridging the digital divide is on track to be a reality in 2019,” said Greg Wyler, founder of OneWeb. “Together with our committed and visionary founding shareholders we have the key elements in place: regulatory, technology, launches, satellites, as well as commercial operators in over 50 countries and territories. We are committed to solving one of the world’s biggest problems – enabling affordable broadband Internet access for everyone. We are excited about the next phase, which will involve working with countries, telecom operators and aid organizations to help them realize their goals of open and ubiquitous access.”

“We’re excited to be part of OneWeb’s endeavor to provide global Internet access for everybody, everywhere. Whether at some remote place on earth or flying high on an Airbus aircraft, you’ll be connected: a grand proposition for mankind and a sound business opportunity for us! We are committed to giving our full industrial and space expertise to this mission,” said Tom Enders, CEO of Airbus Group.

“Access to affordable high-speed Internet is a powerful tool for economic development and empowerment of populations, particularly, in emerging economies. OneWeb is an innovative platform backed by leading global corporations and will complement the efforts of Governments and telecom operators across the globe to take Internet to the masses. Having witnessed the deep positive impact of enabling communications across our global operations, Bharti is delighted to be a part of this initiative that will accelerate the journey towards building a digitally inclusive world,” said Sunil Bharti Mittal, Chairman of Bharti Enterprises. Bharti Airtel, a group company of Bharti Enterprises with operations in 20 countries across Asia and Africa, will be able to leverage the investment by becoming a distributor of these services across its operations.

“OneWeb is a game-changing next generation satellite system,” said Pradman Kaul, President of Hughes. “We have been looking at every detail and are excited to participate both in the design, development and production of the ground system. In addition, we will employ the OneWeb network to deliver services to our global base of customers and distribution partners.”

“Intelsat provides more satellite broadband connectivity to more users than any other company. From villages and governments, to enterprises and communications providers, Intelsat has witnessed firsthand the economic growth and value creation that result from access to reliable communications,” said Stephen Spengler, CEO of Intelsat S.A. “Our role in the commercial space sector is to push for innovations that can drive increased performance, economics and simple access for our users. Intelsat has the world’s largest fleet of Ku Band geostationary satellites and our interoperability will enable pole-to-pole and urban canyon coverage with new services that further our goal of a connected world.”

“Qualcomm has built the foundational technologies which spread mobile broadband systems worldwide. But there still remain un-served and underserved areas. Our investment in and work on OneWeb will extend broadband connectivity to everyone and everything, everywhere around the world,” said Dr. Paul E. Jacobs, Executive Chairman of Qualcomm Incorporated.

“This project is exciting because it combines commerce with purpose,” said Bea Perez, Chief Sustainability Officer of The Coca-Cola Company. “We believe it will help spur local economic development where people are in the greatest need, while also helping our business by improving real-time access to some of the world’s most remote areas where we are already active in helping provide opportunities for entrepreneurs.”

“We would like nothing better than to bring true affordable broadband coverage to 100% of Mexico, but running cables and placing towers for that level of coverage has just not been possible. We are backing OneWeb, as we believe it has all the pieces in place to create that service in the future,” said Ricardo Salinas, Chairman of Totalplay, a Grupo Salinas Company.

“Our vision is to make the Internet affordable for everyone, connecting remote areas to rest of the world and helping to raise living standards and prosperity in some of the poorest regions today,” said Sir Richard Branson, founder of the Virgin Group. “We believe that OneWeb, together with Virgin Galactic’s LauncherOne satellite launch system, has the capability to make this a reality.”