NASA Successfully Tests a System They Hope They Will Never Need to Use ... Orion's Launch Abort System

NASA's successful July 2 demonstration proves that the Orion spacecraft’s launch abort system can outrun a speeding rocket and pull astronauts to safety during an emergency launch — an exercise that everyone hopes will never need to happen.

The test is another milestone in the agency’s preparation for Artemis missions to the Moon that will lead to astronaut missions to Mars. 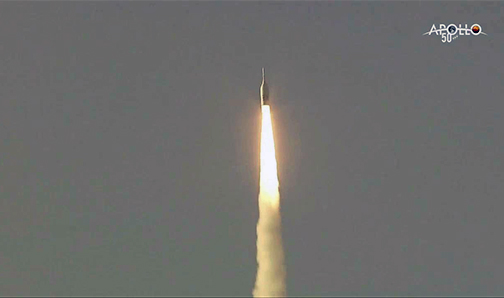 During the approximately three-minute test, called Ascent Abort-2, a test version of the Orion crew module launched at 7:00 a.m. EDT from Space Launch Complex 46 at Cape Canaveral Air Force Station in Florida on a modified Peacekeeper missile procured through the U.S. Air Force and built by Northrop Grumman.

The Orion test spacecraft traveled to an altitude of about six miles, at which point it experienced high-stress aerodynamic conditions expected during ascent. The abort sequence triggered and, within milliseconds, the abort motor fired to pull the crew module away from the rocket. Its attitude control motor flipped the capsule end-over-end to properly orient it, and then the jettison motor fired, releasing the crew module for splashdown in the Atlantic Ocean.

A team is collecting the 12 data recorders that were ejected during the test capsule’s descent. Analysis of the information will provide insight into the abort system’s performance.

The tower-like abort structure consists of two parts: the fairing assembly, which is a shell composed of a lightweight composite material that protects the capsule from the heat, air flow and acoustics of the launch, ascent, and abort environments; and the launch abort tower, which includes the abort motor, attitude control motor, and jettison motor. The system is built specifically for deep space missions and to ride on NASA’s powerful Space Launch System (SLS) rocket. 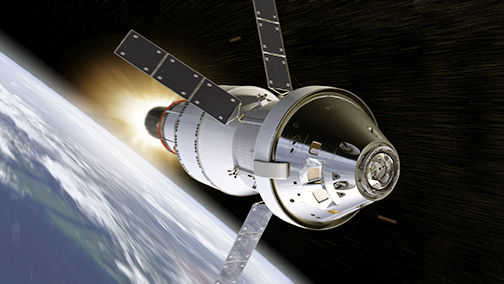 During Exploration Mission-1, Orion will venture thousands of miles beyond the moon during an approximately three week mission. NASA photo.

NASA was able to accelerate the test schedule and lower costs by simplifying the test spacecraft and eliminating parachutes and related systems. NASA already qualified the parachute system for crewed flights through an extensive series of 17 developmental tests and eight qualification tests completed at the end of 2018.

Engineers are making progress building and testing the Orion spacecraft for Artemis 1, the first uncrewed mission with the SLS rocket – an integrated system traveling thousands of miles beyond the Moon – and for Artemis 2, the first mission with astronauts.

At NASA’s Kennedy Space Center in Florida, technicians are preparing to attach the Orion crew and service modules before testing at the agency’s Plum Brook Station in Sandusky, Ohio, later this year. The crew module for Artemis 2 is being outfitted with thousands of elements – from bolts and strain gauges to parachutes and propulsion lines.

The agency recently reached major milestones for the SLS rocket, assembling four of the five parts that make up the massive core stage that will launch Artemis 1 and delivering the four engines that will be integrated into the core stage, along with the engine section, later this summer. When completed, the entire core stage will be the largest rocket stage NASA has built since manufacturing the Saturn V stages for NASA’s Apollo lunar missions in the 1960s.

Orion is part of NASA’s backbone for deep space exploration, along with the SLS and Gateway, that will land the first woman and next man on the Moon by 2024. Through the Artemis program, the next American Moon walkers will depart Earth aboard Orion and begin a new era of exploration.

Bill Hill, Deputy Associate Administrator for Exploration Systems Development at NASA Headquarters in Washington, said the most powerful rocket in the world is being built to send astronauts to the Moon in the Orion spacecraft for Artemis missions,. With this exploration system designed to safely carry humans farther into space than ever before, also available will be an equally powerful launch abort system that will pull the crew away if there is a problem with the rocket during the early portion of ascent.

Mark Kirasich, Orion program manager at Johnson Space Center in Houston, added that launching into space is one of the most difficult and dangerous parts of going to the Moon. This test mimicked some of the most challenging conditions Orion will ever face should an emergency develop during the ascent phase of flight. The team has now demonstrated the abort capabilities under these demanding conditions and NASA is now one huge step closer to the first Artemis flight carrying people to the Moon.