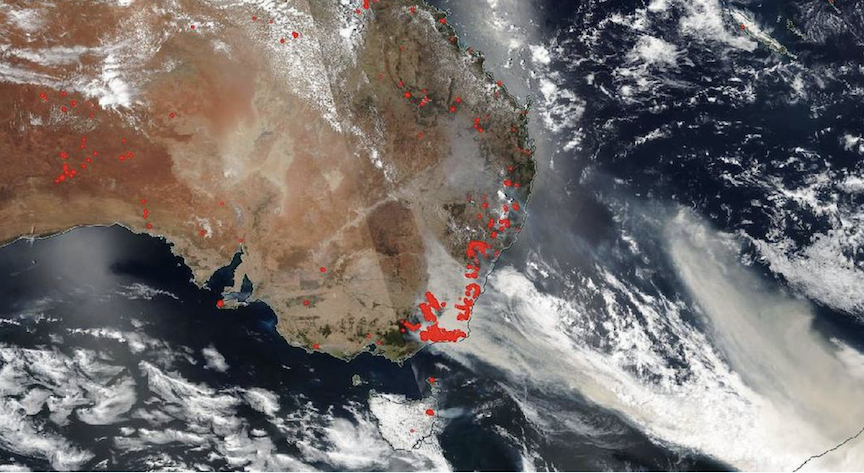 As the New Year starts, the outlook for the bushfire situation in Australia continues to be grim. These huge and disastrous fires continue to burn ferociously and with abandon, and reports have come out that the fires have actually intensified in the last 12 hours. NOAA-NASA's Suomi NPP satellite captured imagery of the fires and the resultant billowing smoke cascading off the edge of Australia on Jan. 01, 2020.

In the resort town Mallacoota, Australia, wildfires surrounded the southeastern seaside town. Over 4,000 people were forced to seek refuge on the beach and even boats in the water yesterday as deadly blazes closed in. The scene was described by residents as apocalyptic, with the sky turning a dark orange.

On the major fire updates page of the New South Wales Rural Fire Service page (this is discounting more fires that have plagued the states of Victoria and Queensland) there are nearly 1.5 million hectares that are currently on fire. That is 3.67 million acres that continuing to burn just in New South Wales alone.

According to the Bushfires and Natural Hazards CRC website: "â€‹The 2019/20 fire season is well underway with multiple large bushfires occurring since the release of the previous Outlook in August. Queensland and New South Wales in particular have experienced severe fires, but all states have had challenging fire conditions. Catastrophic fire danger ratings have been issued in NSW, Western Australia, South Australia and Victoria, and there has been loss of human lives and animals, and damage to property and the environment." 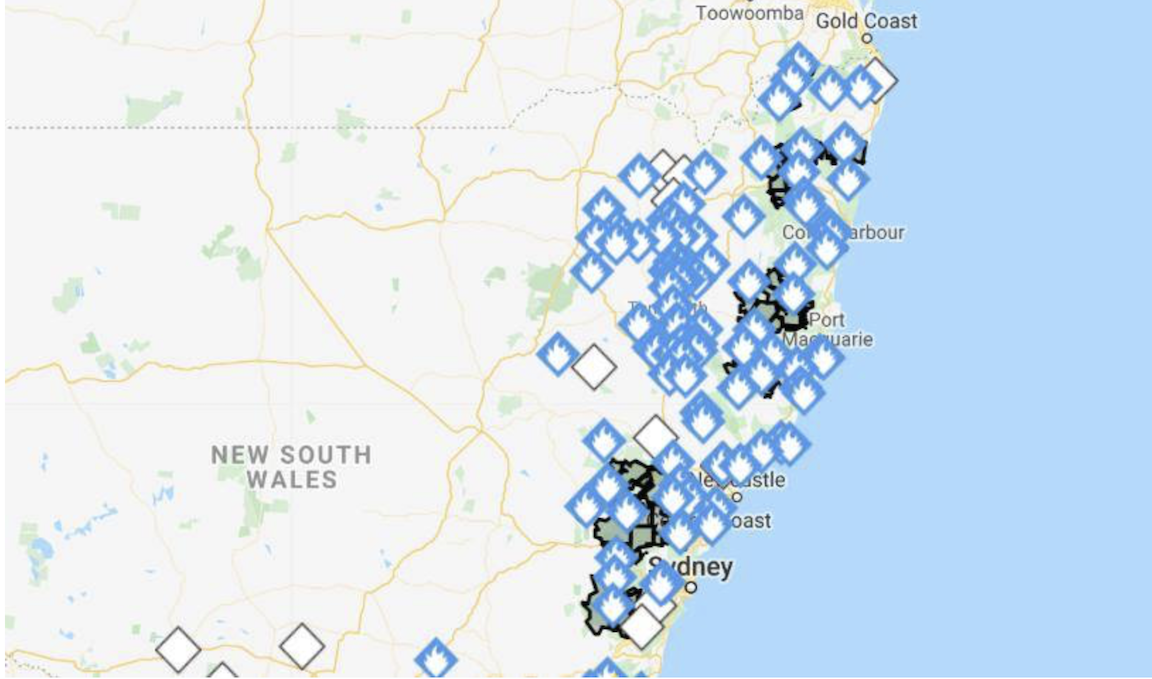 For more information about the map and the individual fires go to: https://www.rfs.nsw.gov.au/fire-information/fires-near-me Credits: Courtesy of the New South Wales Rural Fire Service webpage

The 2019/2020 outlook for the fire season was showing: "above normal bushfire potential for large fires to take hold based on recent and predicted weather, the dryness of the land and forests, recent fire history and local firefighting resources." This prediction has come to pass and exceed the outlook for the year.  And no end is currently in sight.

The map below taken from the New South Wales Rural Fire Service website shows the areas currently on fire.  There is almost no area which has not been affected to date.

NASA’s satellite instruments are often the first to detect wildfires burning in remote regions, and the locations of new fires are sent directly to land managers worldwide within hours of the satellite overpass. Together, NASA instruments detect actively burning fires, track the transport of smoke from fires, provide information for fire management, and map the extent of changes to ecosystems, based on the extent and severity of burn scars. NASA has a fleet of Earth-observing instruments, many of which contribute to our understanding of fire in the Earth system. Satellites in orbit around the poles provide observations of the entire planet several times per day, whereas satellites in a geostationary orbit provide coarse-resolution imagery of fires, smoke and clouds every five to 15 minutes. For more information visit: