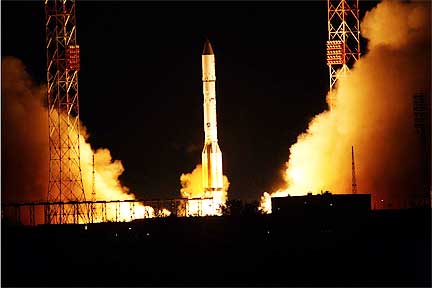 Photo Credit: International Launch Services (ILS)
[SatNews] Awesome — night launches light up the sky, and this one did not disappoint.

SES S.A. (Euronext Paris and Luxembourg Stock Exchange: SESG) announces that the QuetzSat-1 satellite roared into space on board an ILS Proton Breeze M booster today at 00:32 am Baikonur time (20:32 CEST and 14:32 EDT on September 29th, 2011). After a 9-hour, 13-minute mission, the Breeze M upper stage of the Proton rocket successfully released the QuetzSat-1 satellite directly into geostationary transfer orbit. 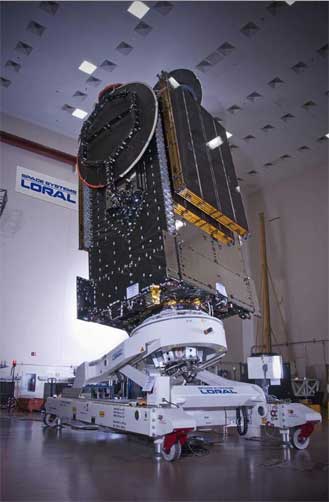 Space Systems/Loral-built satellite for SES is shown here before it shipped to launch base.
QuetzSat-1 is an all Ku-band high-powered (20-kilowatt) communications broadcasting satellite with coverage of Mexico, USA, and Central America which is fully contracted to a subsidiary of EchoStar Corporation and will be used in part by Dish Mexico, an EchoStar joint venture, for Direct-To-Home (DTH) services in Mexico. The spacecraft is based on Space Systems/Loral’s highly reliable 1300 satellite platform and carries 32 Ku-band transponders. QuetzSat-1 provides the flexibility to support a broad range of applications and technology advances and provides high power for advanced DTH television. It is designed to deliver service for 15 years or longer.

This was the 368th launch for Proton since its inaugural flight in 1965, and the 67thILS Proton launch overall. The Proton Breeze M launch vehicle was developed and built by Khrunichev Research and Production Space Center of Moscow, one of the pillars of the Russian space industry and the majority shareholder in ILS.

The Proton M launch vehicle, utilizing a 5-burn Breeze M mission design, will lift off from Pad 39 at Baikonur Cosmodrome, Kazakhstan, with the QuetzSat-1 satellite on board. The first three stages of the Proton will use a standard ascent profile to place the orbital unit (Breeze M upper stage and the QuetzSat-1 satellite) into a sub-orbital trajectory. 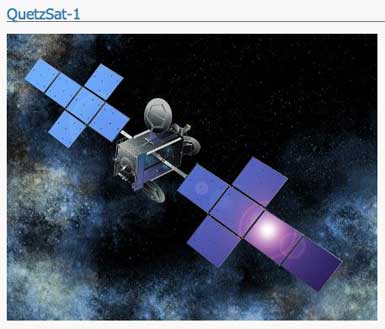 Procured by SES, QuetzSat-1 is a high-power communications satellite with coverage of Mexico, North America, and Central America, which is fully contracted to a subsidiary of EchoStar Corporation and will be used in part by Dish Mexico, an EchoStar joint venture, for Direct-To-Home (DTH) services in Mexico. The Ku-band satellite is scheduled for launch September 30 and is designed to provide service for 15 years or more. Based on the flight-proven SS/L 1300 satellite platform, which provides flexibility for a broad range of applications, the satellite will be located at 77 degrees West.
From this point in the mission, the Breeze M will perform planned mission maneuvers to advance the orbital unit first to a circular parking orbit, then to an intermediate orbit, followed by a transfer orbit, and finally to a geosynchronous transfer orbit. Separation of the QuetzSat-1 satellite is scheduled to occur approximately 9 hours, 13 minutes after liftoff. "We have enjoyed a close working relationship with SES, and QuetzSat is the first to launch of three SES satellites currently under construction at SS/L," said John Celli, President of Space Systems/Loral. "Our companies share a commitment to providing the infrastructure for outstanding satellite communications and we are very pleased to support SES' growth in fast developing markets around the world."

Romain Bausch, President and CEO of SES declared: “The launch of QuetzSat-1 is the fourth successful SES satellite launch this year. We would like to thank Space Systems/Loral and ILS for a mission well executed according to specifications. And we look forward to providing EchoStar with a state-of-the-art new satellite to support the services they provide to their customers in the United States and Mexico.”

ILS President Frank McKenna said: “We are honored to partner with industry innovator SES in launching over one third of their operational fleet on ILS Proton over the past 15 years. QuetzSat-1 is a very important satellite to SES and their customer EchoStar and ILS has worked in partnership to make this launch a success. We thank the teams of SES, ILS, Khrunichev and Space Systems/Loral for ensuring mission success with the ILS Proton launch of QuetzSat-1 and we look forward to our upcoming launches with SES.”

The next SES launch is scheduled for the second half of November, when an ILS Proton booster will orbit the SES-4 spacecraft from the Baikonur Cosmodrome in Kazakhstan.