On Sunday, small satellite launcher Virgin Orbit did an intricate dress rehearsal of how it plans to launch rockets into space — without actually sending any rockets anywhere. The successful demonstration potentially paves the way for the company’s first test launch sometime this year.

Instead of launching its vehicles vertically from the ground — like most other rocket companies — Virgin Orbit plans to launch them from midair. The company has developed a small rocket called LauncherOne, which is designed to take off from under the wing of the company’s giant 747 airplane nicknamed Cosmic Girl. The plane is meant to fly to an altitude of 35,000 feet, and from there, LauncherOne will fall from the wing and ignite its main engine. It’ll then climb the rest of the way to space. 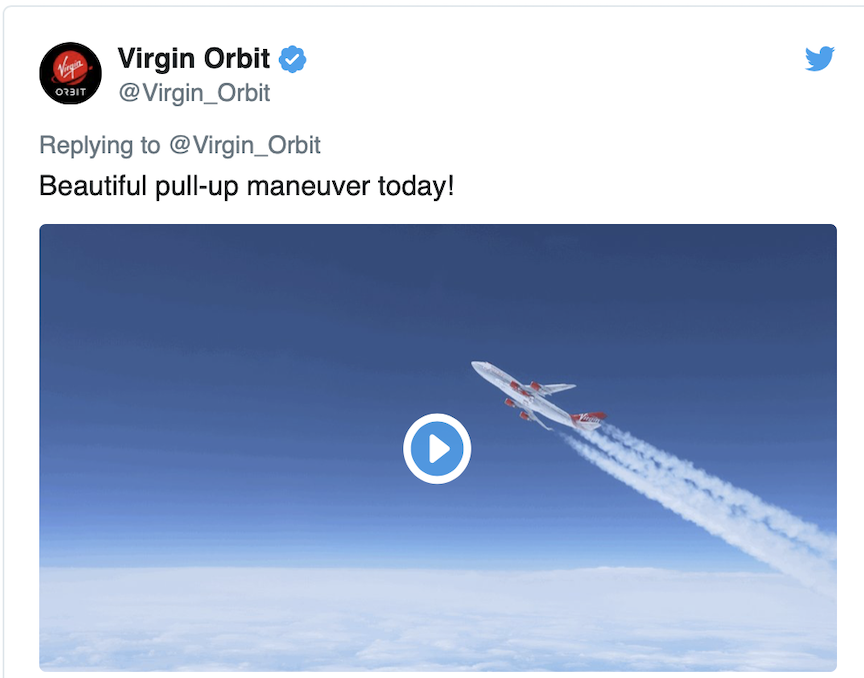 Virgin Orbit has been going through a rigorous test program before its first launch — a process that has entailed testing LauncherOne’s engines on the ground, doing periodic flights with Cosmic Girl, and more. The company has also been doing incremental demonstration missions with both the rocket and the plane. First, Virgin Orbit flew Cosmic Girl with a dummy rocket attached, filled with water to simulate how LauncherOne will weigh when it’s loaded with propellant. And in July, the company actually dropped LauncherOne from Cosmic Girl, to see if the rocket fell as expected.

During Sunday’s flight, Virgin Orbit ran through every part of the process of launching LauncherOne without the actual takeoff. The company filled LauncherOne up with liquid nitrogen, which is similar in temperature to the extremely cold liquid oxygen propellant the rocket will carry when it’s set to fly. Cosmic Girl then took off from Virgin Orbit’s facilities in Mojave, California, and went through a regular flight plan for a launch.

The plane flew to the exact place over the ocean where LauncherOne will drop during its first test. It even did the same pull-up maneuver it’ll do just before LauncherOne releases from the wing, which is meant to position the vehicle at the right angle for getting into orbit. For this dress rehearsal, the cold rocket remained attached, and the plane returned to Mojave afterward.

Virgin Orbit claims the demonstration went well and says it will provide more details about its plans for its first test launch soon. The timing of that test launch remains uncertain. The company has completely reorganized its business operations in response to the COVID-19 pandemic. Up to 90 percent of Virgin Orbit’s workforce is staying at home, and the company has made some major changes to its facilities, according to a blog post:

We reconfigured our Mission Control. We re-wrote procedures for our technicians on the shop floor and at the test site in order to meet social distancing requirements. We were already accustomed to using Personal Protective Equipment during many of our operations — but now we are ramping up our standards to match the latest guidelines from the CDC and other leading medical experts. And of course, we are spending extra time regularly sterilizing every square inch of our manufacturing facility, constantly educating our staff, and much more.

Because of all these changes, the company says there are still some more rehearsals to do before that first launch so that employees can run through operations with all of the new COVID-19 procedures in place. But Virgin Orbit says that its inaugural launch “will be squarely in our sights.”