Orbital's Delivery Service...Cygnus Is Spot On At ISS (Transport | Resupply)


[SatNews] "...“Our first mission under the CRS contract (US$1.9billion) with NASA was flawlessly executed..." 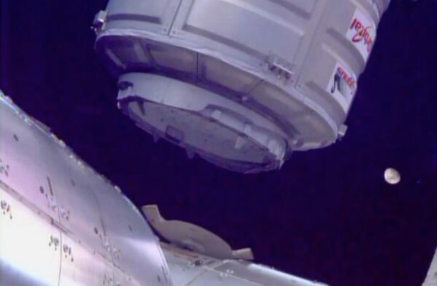 logistics spacecraft successfully completed its rendezvous and approach maneuvers with the International Space Station (ISS) and was grappled and berthed with the station by the Expedition 38 astronaut crew earlier this morning.  After Cygnus was launched into orbit by Orbital’s Antares™ rocket on Thursday, January 9 from NASA’s Wallops Flight Facility, it completed a series of thruster firings and other maneuvers bringing the spacecraft in close proximity to the ISS.  Final approach to the station began at about 3:00 a.m. (EST) this morning, culminating with the station’s robotic arm grappling the spacecraft at 6:08 a.m. when it was about 30 feet (10 meters) from the ISS.  Cygnus was then guided to its berthing port on the nadir side of the ISS’ Harmony module where its installation was completed at 8:05 a.m.

“Our first mission under the CRS contract with NASA was flawlessly executed by our Antares and Cygnus operations team, from the picture-perfect launch from NASA’s Wallops Flight Facility to the rendezvous, capture and berthing at the space station this morning,” said Mr. David W. Thompson, Orbital’s President and Chief Executive Officer.  “From the men and women involved in the design, integration and test, to those who launched the Antares and operated the Cygnus, our whole team has performed at a very high level for our NASA customer and I am very proud of their extraordinary efforts.” 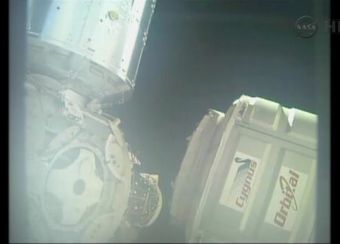 Cygnus will remain berthed at the ISS until February 18. Cygnus is delivering approximately 2,780 lbs. (1,260 kg.) of cargo and science payloads to the Expedition 38 astronauts.  Either later today or tomorrow, the crew plans to open the Cygnus hatch and make initial ingress into its cargo module.  Cygnus will remain attached to the station for 37 days before departing with approximately 2,800 lbs. (1,300 kg.) of disposable cargo for a safe, destructive reentry over the Pacific Ocean.

Under a $1.9 billion CRS contract with NASA, Orbital will use Antares and Cygnus to deliver up to 44,000 pounds (20,000 kilograms) of cargo to the ISS over eight missions, including the mission currently underway, through late 2016.  For these missions, NASA will manifest a variety of essential items based on ISS program needs, including food, clothing, crew supplies, spare parts and equipment, and scientific experiments.


Orbital developed the Cygnus cargo spacecraft as part of its COTS joint research and development initiative with NASA.  Cygnus consists of a common Service Module (SM) and a Pressurized Cargo Module (PCM). The SM incorporates avionics, power, propulsion and communications systems already successfully flown aboard dozens of Orbital’s LEOStar™ and GEOStar™ satellites.  The PCM, designed and built by Thales Alenia Space under a subcontract from Orbital, is based on the Multi-Purpose Logistics Module (MPLM) previously used with the Space Shuttle.  With a full load of cargo and fuel, the standard-configuration Cygnus weighs about 5,200 kg at launch and generates 3.5 kw of electrical power while in orbit.  It is capable of extended-duration missions of a year or longer in space.

Orbital develops and manufactures small- and medium-class rockets and space systems for commercial, military and civil government customers. The company’s primary products are satellites and launch vehicles, including low-Earth orbit, geosynchronous-Earth orbit and planetary spacecraft for communications, remote sensing, scientific and defense missions; human-rated space systems for Earth-orbit, lunar and other missions; ground- and air-launched rockets that deliver satellites into orbit; and missile defense systems that are used as interceptor and target vehicles. Orbital also provides satellite subsystems and space-related technical services to government agencies and laboratories. More information about Orbital can be found at.