Blue Origin successfully launched a mannequin-crewed, New Shepard Mission 8 repurposed rocket, with the vehicle reaching the highest altitude ever attained by that launch vehicle of 107 kilometers (351,000 feet) — the rocket was successfully relanded at the West Texas launch site, accompanied by a sonic boom.

Aboard are payloads that represent a range of users, from NASA’s Johnson Space Center to a small commercial communications firm, as well as the firm’s first European customers, funded by the German national space agency, DLR. Each of the payloads was outfitted with a custom Blue Origin Payload Locker to provide structural, power, and data interfaces throughout the flight. 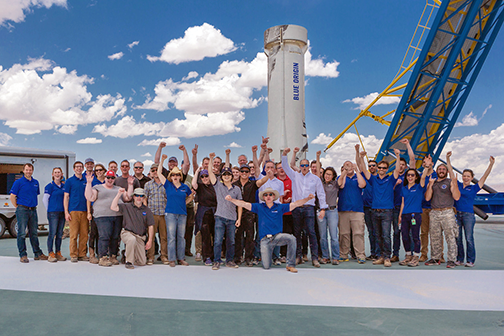 University of Bayreuth with ZARM (The Center of Applied Space Technology and Microgravity at the University of Bremen) and funding from German space agency, DLR: The Daphnia experiment investigates the effects of microgravity on gene expression. 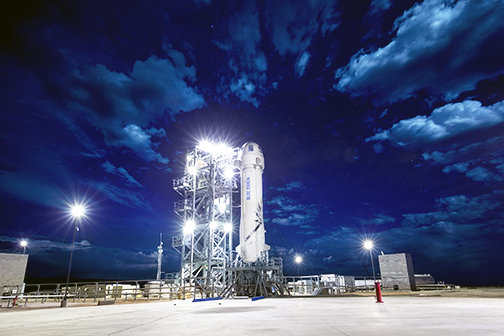 Otto von Guericke University (Magdeburg, Germany) with ZARM (The Center of Applied Space Technology and Microgravity at the University of Bremen) and funding from German space agency, DLR:  EQUIPAGE studies the motion of macroscopic rod shaped grains to validate physics models of these systems under microgravity conditions.

University of Duisburg-Essen with ZARM (The Center of Applied Space Technology and Microgravity at the University of Bremen) and funding from German space agency, DLR: EUPHORIE uses a laser to examine the phenomenon of photophoresis, the interaction of light on solid particles suspended in a gas. As the laser heats one side of such particles, it warms nearby gas molecules and accelerates the particle towards its cooler side. This research has applications to the study of early solar system evolution and meteorite formation.

More info regarding the rocket's payloads may be obtained at www.blueorigin.com/payloads/.