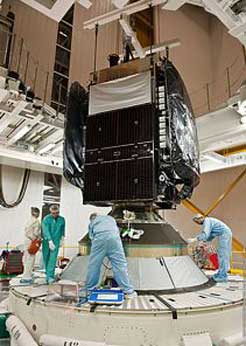 Intelsat New Dawn is been installed as the lower passenger in Ariane 5’s dual-payload “stack.”
[SatNews] Arianespace is a hive of activity with dual launches and more to come.

Arianespace is maintaining the mission pace with its heavy-lift and medium-weight vehicles as two Ariane 5 flights are being readied at the Spaceport in French Guiana, with a Soyuz campaign also underway at Baikonur Cosmodrome in Kazakhstan.

The next launch from French Guiana will be an Ariane 5 with the dual payload of Intelsat New Dawn and Yahsat Y1A, which is set for launch on March 30. In preparations for this mission — Arianespace’s second of 2011 — Intelsat New Dawn telecommunications satellite has now integrated on the workhorse launch vehicle, placing it as the lower passenger in the dual-passenger payload “stack.”

Intelsat New Dawn is the first-ever African private sector communications satellite, and was conceived to supply critical communications infrastructure for African customers delivering wireless backhaul, broadband and media content, which are among the fastest growing satellite-based applications in Africa.

Produced by Orbital Sciences Corporation in Dulles, Virginia, this relay platform carries C-band and Ku-band transponders, and will have a liftoff mass of 3,000 kg.  After its deployment by Ariane 5, it will be positioned at a geostationary orbital slot at 32.8° East for its Africa area coverage.

Intelsat New Dawn was developed for a joint venture consortium led by Convergence Partners and Intelsat, and is to be operated and marketed as a part of the global Intelsat fleet.

To be orbited along with Intelsat New Dawn on Arianespace’s March 30 mission is the 6,000-kg. Yahsat Y1A, which will be utilized by the Al Yah Satellite Communications Company to provide customized relay services for the government and commercial sectors in the Middle East, Africa, Europe and Southwest Asia.

Both solid propellant boosters for this third Ariane 5 launch of 2011 have been rolled out from the Spaceport’s booster preparation zone, and were then positioned on the mobile launch table for mating with Ariane 5’s cryogenic core stage.

The combination of boosters and cryogenic core stage provide the required thrust to propel an Ariane 5 during its liftoff and initial ascent. In the countdown sequence, Ariane 5’s cryogenic engine is ignited first, followed seven seconds later by the boosters’ ignition. During climb-out, the boosters are jettisoned at two minutes into the mission at the completion of their burn, while the cryogenic stage operates six more minutes to position Ariane 5’s upper stage and dual-satellite payload for the final propulsion phase and injection into orbit.

In Kazakhstan, activity has begun for Arianespace’s second Soyuz launch to deploy Globalstar’s second-generation satellite constellation, which is scheduled during May from Kazakhstan’s Baikonur Cosmodrome.

The six spacecraft to be carried by the medium-lift Soyuz arrived last week at the Cosmodrome, delivered by an Antonov An-124 that also brought the ground support equipment for the satellites’ pre-launch checkout.

Globalstar has contracted with Arianespace for a total of four Soyuz launches carrying six spacecraft each to orbit its second-generation constellation, which will be composed of 24 satellites.  The mission in May will build on the successful kick-off launch conducted last October.  After the upcoming mission, Globalstar plans two additional flights within 60-90 days following each of the previous launches.

These spacecraft will join eight first-generation platforms launched during 2007 in support Globalstar’s current lineup of voice, Duplex and Simplex data products and services including the company’s SPOT retail consumer products.   Globalstar’s second-generation satellites are 700-kg.-class spacecraft with a trapezoidal-shaped main body, enabling six of them to be integrated on a dispenser system for the Soyuz missions.

The Globalstar flights are being performed on behalf of Arianespace by its Starsem affiliate.  Soyuz launchers have played a key role in the creation of Globalstar’s satellite constellations.  Eight Soyuz missions conducted by Starsem from 1999 to 2007 orbited a total of 32 first-generation Globalstar spacecraft. On these previous flights, each mission carried four of the 450-kg. first-generation satellites.