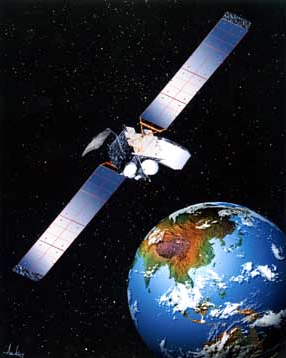 The test was performed on November 1, 2014, the trial campaign saw Nippon TV transmit 5MHz bandwidth with a 256APSK carrier from a Satellite News Gathering (SNG) truck to the Superbird-B2 satellite. The transmission was successfully received at the headquarters of Nippon TV in Minato, Tokyo.

The test follows Nippon TV’s interest in the new DVB-S2X modulation standard for its next-generation video network over Japan. Considering the benefit of the 5 percent Roll Off (RO) technology that saves satellite bandwidth, Nippon TV wanted to establish the feasibility of using this higher modulation and the associated challenges. Putting the DVB-S2X 256APSK to the test, the team used Newtec’s MDM6100 Broadcast Satellite Modem and 5MHZ bandwidth on a JSAT transponder. This is the same amount of bandwidth required for Nippon TV’s next-generation video network. 25Mbps was transmitted from the SNG using a 1.4m antenna, which was received on a 5m dish at the TV station. 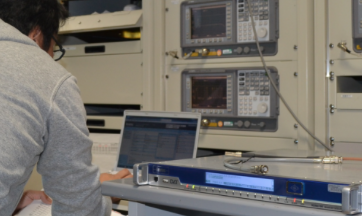 Engineer setting up the network with the Newtec MDM6100 Broadcast Satellite Modem during the DVB-S2X 256APSK trials at Nippon TV.

“Knowing that DVB-S2X can reduce satellite bandwidth with its 5 percent roll off technology, we wanted to test DVB-S2X 256APSK modulation on an actual satellite because it requires higher quality and link margin, which could have been a challenge for us. Following the trial, I am confident of the Superbird-B2 satellite’s ability to accommodate this modulation,” said Mr. Tetsuo Makino, Director of Engineering Technical Strategy Group at Nippon TV.

For the trial, Nippon TV teamed up with MOUBIC and JSAT. MOUBIC is a Satcom and broadcast equipment provider in Japan and a long term Newtec partner. Newtec is a specialist in satellite communications system design and integration, as well as one of the main driving forces behind the DVB-S2X standard.

“The new DVB extension, called DVB-S2X, with improved efficiency, will enable the satellite industry to increase profitability and allow for business growth throughout all applications, from high-speed IP to broadcast,” said Dirk Breynaert, Newtec’s CTO and Co-founder.

DVB-S2X boosts the satellite link up to 20 percent in Direct-To-Home (DTH) networks and up to 51percent in other professional applications compared to DVB-S2. It does this through a combination of innovative technologies, including lower roll offs, advanced filter technologies, Modulation and Coding (MODCOD) and Forward Error Correction (FEC) upgrades, wideband implementation and additional standard scrambling sequences. It is available on all Newtec products as a software upgrade.