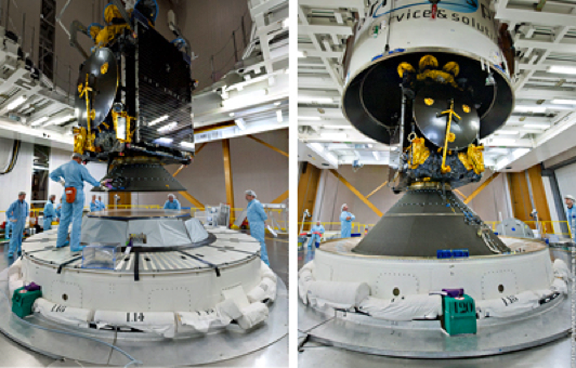 Ariane 5’s final payload integration – which occurred inside the launch vehicle’s Final Assembly Building – is highlighted in the sequence above. Athena-Fidus is being installed atop the launcher’s core cryogenic stage in the left-hand photo; while at right, the payload fairing containing ABS-2 is lowered over its co-passenger to create the dual-payload “stack.”

Encapsulated in its ogive-shaped protective fairing, ABS-2 was lowered into place yesterday over Athena-Fidus - which had been installed atop Ariane 5's cryogenic core stage during activity earlier in the week. These integration steps were performed inside the Spaceport's Final Assembly Building for Ariane 5, and enable a new series of preparation milestones to begin. They include the launch readiness review on February 4, followed by Ariane 5's rollout to the ELA-3 launch zone the subsequent day.

Liftoff is scheduled during a 2-hr., 5-min. launch window opening February 6 at 5:30 p.m. local time in French Guiana, with the two spacecraft to be deployed on a flight lasting approximately 32 minutes. Ariane 5 will deliver a payload lift performance of more than 10,200kg during the mission, which includes a combined total of over 9,400kg for ABS-2 and Athena-Fidus, plus the launch vehicle's dual-passenger dispenser system and satellite integration hardware.

ABS-2 will ride as the mission's upper passenger, to be deployed first in its flight sequence. Produced by Space Systems/Loral (SSL) for global satellite operator ABS, it is designed to provide multiple services that include direct-to-home and cable television distribution, VSAT, data networks and telecommunications, as well as the supply of substantial new capacity from the operator's prime orbital location at 75 degrees East.