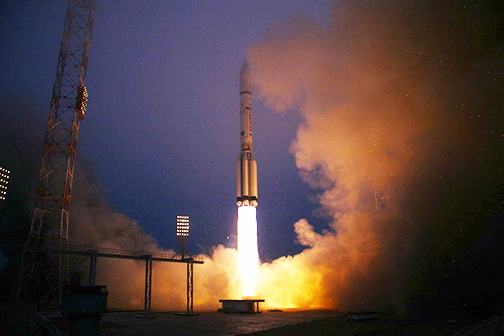 Photo of the launch of the Russian Blagovest military satellite.
Photo is courtesy of Roscosmos.

Russia has successfully placed into orbit the nation's second Blagovest military communication satellite, according to the builder of the satellite, Information Satellite Systems Reshetnev Company.

The launch of the Proton-M rocket with Blagovest No. 12 aboard occurred at the Baikonur cosmodrome at 1:12 a.m. Moscow time on Thursday (2212 GMT on Wednesday). After nine hours and two minutes, the device, with the help of the 'Breeze-M' upper stage, was put into geostationary orbit. The first Blagovest ("Good news" in Russian) was launched from Baikonur cosmodrome in Kazakhstan on Aug. 17, 2017.

The Ministry of Defense plans to deploy a group of four Blagovest satellites by 2020, according to the Russian TASS news agency.