SpaceX did it again, accomplishing three important goals, and then modestly noting them on their website:

Following stage separation, SpaceX successfully landed Falcon 9’s first stage on the “Of Course I Still Love You” droneship in the Atlantic Ocean.

This was a triple play in which SpaceX launched and deployed TESS, NASA’s satellite that is seeking planets. Scientists are also considering the possibilities of planets that could support life. TESS, which stands for Transiting Exoplanet Survey Satellite, is a telescope/camera that will hunt for undiscovered worlds around nearby stars, providing targets where future studies will assess their capacity to harbor life.

Wednesday's launch came two days after the original date set for Monday, in which SpaceX scrubbed sending Falcon 9 off as they wanted to conduct more analysis of the guidance, navigation and control systems. 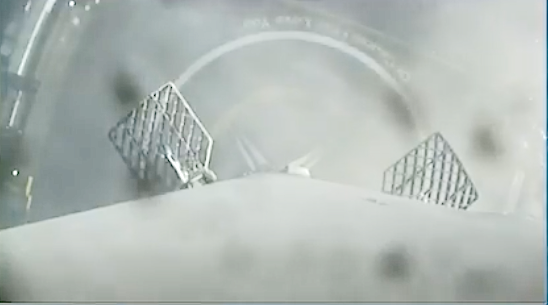 Once the launch took place there was a delicate 'dance' of sorts in which a 30-second window at 6:51 p.m. in which the satellite had to get close to the moon to use its gravity in achieving its final orbit. With the gravitational assist from the moon, TESS will travel in a 13.7-day orbit around Earth which has been carefully planned for the moon’s gravity. TESS will be looking for a phenomenon known as a transit, where a planet passes in front of its star, causing a periodic and regular dip in the star’s brightness. NASA’s Kepler spacecraft used the same method.

After TESS was released the satellite deployed its solar arrays, and it will take 60 days for the satellite to attain its proper orbit. This two year mission includes tests of its instruments using four wide-field cameras that will give TESS a field-of-view that covers 85 percent of the entire sky.

While this was happening Falcon 9’s first stage landed on the droneship called “Of Course I Still Love You” located in the Atlantic Ocean.

NASA tweeted that the deployment happened right on schedule and the solar arrays will “give the spacecraft the power it needs to search for worlds beyond our solar system.”

TESS, which stands for Transiting Exoplanet Survey Satellite, is a telescope/camera that will hunt for undiscovered worlds around nearby stars, providing targets where future studies will assess their capacity to harbor life, NASA says.

It’s a NASA Astrophysics Explorer mission led and operated by MIT and managed by Goddard. Orbital ATK manufactured and designed the TESS satellite.

NASA's explained the mission of their 'Planet Hunter' by sharing:

NASA’s Transiting Exoplanet Survey Satellite (TESS) launched on the first-of-its-kind mission to find worlds beyond our solar system, including some that could support life.

TESS, which is expected to find thousands of new exoplanets orbiting nearby stars, lifted off at 6:51 p.m. EDT Wednesday on a SpaceX Falcon 9 rocket from Space Launch Complex 40 at Cape Canaveral Air Force Station in Florida. At 7:53 p.m., the twin solar arrays that will power the spacecraft successfully deployed. 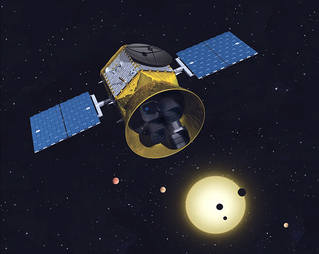 This is a conceptual image of the TESS mission Credits: MIT

“We are thrilled TESS is on its way to help us discover worlds we have yet to imagine, worlds that could possibly be habitable, or harbor life,” said Thomas Zurbuchen, associate administrator of NASA’s Science Mission Directorate in Washington. “With missions like the James Webb Space Telescope to help us study the details of these planets, we are ever the closer to discovering whether we are alone in the universe.”

Over the course of several weeks, TESS will use six thruster burns to travel in a series of progressively elongated orbits to reach the Moon, which will provide a gravitational assist so that TESS can transfer into its 13.7-day final science orbit around Earth. After approximately 60 days of check-out and instrument testing, the spacecraft will begin its work.

“One critical piece for the science return of TESS is the high data rate associated with its orbit,” said George Ricker, TESS principal investigator at the Massachusetts Institute of Technology’s (MIT) Kavli Institute for Astrophysics and Space Research in Cambridge. “Each time the spacecraft passes close to Earth, it will transmit full-frame images taken with the cameras. That’s one of the unique things TESS brings that was not possible before.”

For this two-year survey mission, scientists divided the sky into 26 sectors. TESS will use four unique wide-field cameras to map 13 sectors encompassing the southern sky during its first year of observations and 13 sectors of the northern sky during the second year, altogether covering 85 percent of the sky.

TESS will be watching for phenomena called transits. A transit occurs when a planet passes in front of its star from the observer’s perspective, causing a periodic and regular dip in the star’s brightness. More than 78 percent of the approximately 3,700 confirmed exoplanets have been found using transits.

NASA’s Kepler spacecraft found more than 2,600 exoplanets, most orbiting faint stars between 300 and 3,000 light-years from Earth, using this same method of watching for transits. TESS will focus on stars between 30 and 300 light-years away and 30 to 100 times brighter than Kepler’s targets.

The brightness of these target stars will allow researchers to use spectroscopy, the study of the absorption and emission of light, to determine a planet’s mass, density and atmospheric composition. Water, and other key molecules, in its atmosphere can give us hints about a planets’ capacity to harbor life.

“The targets TESS finds are going to be fantastic subjects for research for decades to come,” said Stephen Rinehart, TESS project scientist at NASA’s Goddard Space Flight Center in Greenbelt, Maryland. “It’s the beginning of a new era of exoplanet research.”

Through the TESS Guest Investigator Program, the worldwide scientific community will be able to conduct research beyond TESS’s core mission in areas ranging from exoplanet characterization to stellar astrophysics, distant galaxies and solar system science.

TESS is a NASA Astrophysics Explorer mission led and operated by MIT and managed by Goddard. George Ricker, of MIT’s Kavli Institute for Astrophysics and Space Research, serves as principal investigator for the mission. TESS’s four wide-field cameras were developed by MIT’s Lincoln Laboratory. Additional partners include Orbital ATK, NASA’s Ames Research Center, the Harvard-Smithsonian Center for Astrophysics, and the Space Telescope Science Institute. More than a dozen universities, research institutes and observatories worldwide are participants in the mission.