Department of Defense... Satellite Launch Would Be A Destabilizer (Launch) 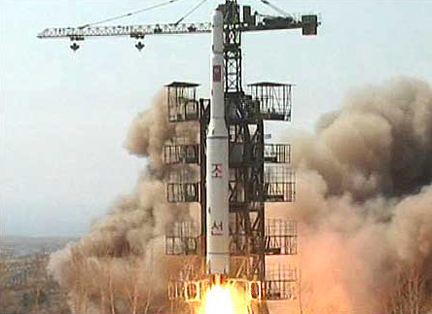 ...a destabilizing influence in the region, Pentagon spokesman Navy Capt. John Kirby stated. The rocket would carry a North Korean-made Kwangmyongsong-3 polar-orbiting earth observation satellite to mark the 100th birthday of late-President Kim Il Sung, a spokesman for the Korean Committee for Space Technology said in a statement. The late president's birthday is April 15.

"If, in fact, they do what they are claiming they will do, it is a very clear violation of two United Nations Security Council resolutions and is in violation of their obligations to the international community," Kirby said. "We would consider it destabilizing behavior," he added, "and we urge the [North] Korean leadership to reconsider this decision and to conform to their obligations under those sanctions."

At the State Department, spokeswoman Victoria Nuland said U.N. Security Council Resolutions Nos. 1718 and 1874 "clearly and unequivocally prohibit North Korea from conducting launches that use ballistic-missile technology." She added, "Such a missile launch would pose a threat to regional security and would also be inconsistent with North Korea's recent undertaking to refrain from long-range missile launches." State Department officials are consulting closely with international partners on next steps, Nuland said.

The satellite will be launched southward from the Sohae satellite launch station in Cholsan County, North Phyongan Province, between April 12 and 16 on a long-range Unha-3 rocket, North Korean officials said in the statement. "A safe flight orbit has been chosen so that carrier rocket debris to be generated during the flight would not have any impact on neighboring countries," they said. North Korean officials said they will "strictly abide by relevant international regulations and usage concerning the launch of scientific and technological satellites for peaceful purposes."

At the Pentagon, Kirby said, "We continue to operate every day with our South Korean counterparts and we hold firmly to our alliance obligations and to security on the Korean peninsula. That's not going to change." The Defense Department, he added, is "very comfortable with the full range of military capabilities we have at our disposal in the Asia Pacific region and in and around the Korean peninsula. We're very comfortable with the alliance and the capabilities of our Korean counterparts in that alliance," he added, "as well as our other allies and partners in the area." (Reported by Cheryl Pellerin, American Forces Press Service.)