NASA... A Magnetic Move To November For Endeavour

NASA has pushed to November the launch of one of its three remaining shuttle missions to modify an experiment module to be attached to the International Space Station (ISS). Shuttle Endeavour, which had been scheduled to lift off July 29, will now launch "no earlier than mid-November 2010" in order to allow scientists to upgrade a magnet in the Alpha Magnetic Spectrometer program to a longer-lasting device. 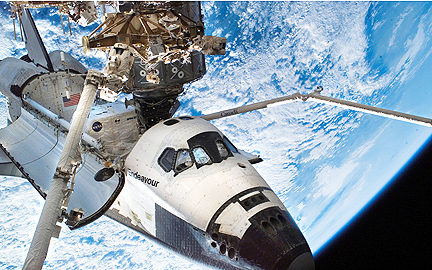 The Shuttle Endeavour at the ISS, photo courtesy of NASA
The Endeavour rescheduling does not affect the next launch, of shuttle Atlantis, due to blast off from Florida's Kennedy Space Center on May 14. The final shuttle mission had been scheduled for September 16, with Discovery flying a last resupply machine to the orbital outpost. Discovery was still slated for its September 16 launch, "but managers will continue to assess its readiness for flight and make changes as appropriate," NASA said. The National Aeronautics and Space Administration is mothballing its shuttle program this year, and once the three shuttles are retired, the United States will rely on Russia to take astronauts to the station aboard three-seater Soyuz spacecraft until a new fleet of commercial space taxis is operational. A successor to the Discovery is scheduled to take off no earlier than 2015.

The Alpha Magnetic Spectrometer — a project led by Nobel laureate Samuel Ting of the Massachusetts Institute of Technology — will be installed on the ISS to help study and shed light on how the universe was formed, and search for evidence of dark matter and anti-matter by measuring cosmic rays.