Proton-M Being Prepped For Inmarsat-5F2 Send Off 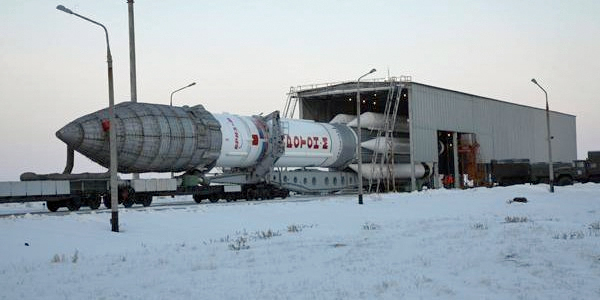 [SatNews] Final preparation is underway for the Proton-M and the vehicle's Inmarsat-5F2 satellite payload at Baikonur.

On January 26, 2015,  in the 92A-50 integration building at the Baikonur spaceport, rocket and space industry specialists completed a variety of technological operations on the rocket assembly and continued the testing process. Now, the Proton-M booster with the Briz-M upper stage and the Inmarsat-5F2 satellite have been delivered to the propellant filling area. For two days, the low-pressure tanks of the upper stage will be filled with the propellant. These are the final operations before the roll-out of the rocket to the launch pad.

Te launch of Inmarsat-5F2 is planned for February 1, 2015. This launch will be the first one for 2015 performed by Proton.